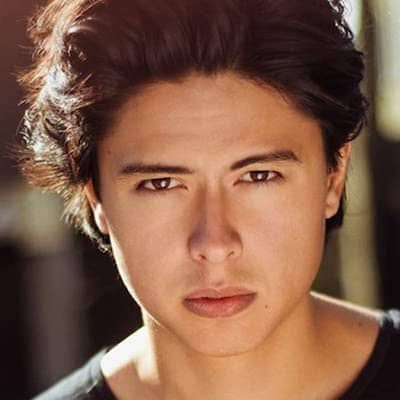 Jordan Connor is currently engaged to his longtime girlfriend Jinjara Mitchell. She is an actress by profession.

As per the reports, they started to date in the year 2013, and on 22 Sep 2018, they exchanged rings. Hence, their fans are eagerly waiting for their wedding bells to ring!

Recently, they went on camping along with their dog. This trip was arranged by Karma Campervans. Jordan uploaded pictures of them enjoying themselves inside a tent.

Who is Jordan Connor?

Jordan Connor is a Canadian actor. He is famed for appearing in Riverdale, Looking for Alaska, Hospital Show, and more.

Recently in 2021, he was seen as Matteo Rey in Nurses, a TV Series.

He was born as Jordan Connor Yuen on 17 Sep 1991 in Calgary, Canada. The name of his mother and his father is under the rug.

Jordan’s ancestry is Asian-Caucasian and talking about his academics, he attended the University of British Columbia plus Vancouver Acting School.

He also went to Sands Secondary School. His younger brother is Brad Yuen and Nicole Yuen is his younger sister.

Jordan Connor as an actor is very successful. His first short movie was Fighting Free (2013) and his latest film was Plan B (2018).

His other big-screen projects are Destroyer (2013), What an Idiot (2014), The Cover-Up (2014), and more. This actor has appeared in several TV shows. His most loved series are Riverdale as Sweet Pea, Looking for Alaska as Kevin, and Hospital Show as Vince.

His other brief appearances were in,

He promoted RYU Apparel via his social account. Some of the top actor’s financial worth is,

This star actor is keeping himself away from rumors and is also not surrounded by any desperate scandals.

Regarding Jordan Connor’s body features, his height is 6 ft 3 inches and his body weight is 86 kg.

Moreover, his eyes are dark brown and his natural hair color is dark brown.

Jordan is available on social sites. His Instagram and Facebook accounts are followed by over 1.1m and 3.6k people respectively.