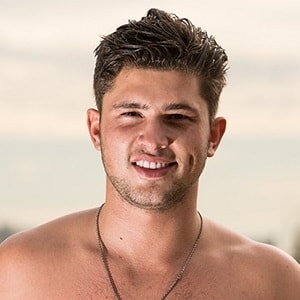 He explained, “We haven’t broken up because we want to start seeing other people – it’s just a break. We’ll give it a couple of months and see how it goes.”

After that, he dated Paula Manzanal from January 2018 but their relationship also did not last long and got separated in May 2018. As he was accused to be the father of Paula’s son, Valentino, he denied but after DNA test, the report showed 99% of similarity and hinted the child is the biological son of Jordan.

Also, he was in a relationship with Chyna Ellis but the relationship ended after she was seen with a mystery man in March 2018. Then, he dated Rosie Williams but ended the relationship after he cheated on her repeatedly in June 2018. Recently, he has been dating Isobel Mills and appeared together on the ITV2 series ‘Ibiza Weekender’ in 2019 and the duo is pursuing their love life happily.

He revealed that he had a physical relationship with 1500 women and also announced that he kept records of every woman he has been intimate.

Who is Jordan Davies?

Jordan Davies is a talented Welsh reality television personality.  Davies is well recognized for his role as a rep on ‘The Magaluf Weekender’ and also for his performance in its successor ‘Ibiza Weekender’. He participated in a competition as a housemate during the twentieth series of ‘Celebrity Big Brother’.

Jordan was born on June 24, 1992, in Cardiff Wales. He is currently 26 years old. His father left his family during which he was only 18 months old.

He along with his younger brother, Oliver, were raised by their singer mother, Barbara. Barbara struggled a lot in order to raise her sons, as her husband took all the money with him. Jordan told that her mother had got another boyfriend but he died because of a heart attack.

He is very good at basketball and football. Jordan holds American citizenship but his ethnicity is unknown.

Talking about his education history, he attended St. David’s School in Pembrokeshire in which he studied A levels He was very shy during his school days and he did not have many friends.

During his early age, he had struggled a lot in order to support his mother. He worked as a graphics assistant, and a barman the age of 16.

After he stepped in his professional career, Davies portrayed the role of himself in the film ‘The Magaluf Weekender’ from 2013 to 2019 and also appeared as the main cast in ‘Ex on the Beach’ during its 3rd, 4th, and 5th series in 2015 and 2017.

He also made his appearance as a housemate on the 12th series of ‘Celebrity Big Birther’ in 2017 but ended becoming the third housemate to be evicted on Day 15.

The talented tv personality has not been so successful in collecting awards and nominations in his name till date.

Talking about net worth, income, and salary, he has not disclosed any data. However, it is under review.

Her ex-girlfriend, Paula Manzanal, is claiming to be pregnant and she has accused Davies of making the model suffer for not supporting her through the pregnancy. She slammed Davies for his lack of interest in their unborn son, Valentino, but his representatives told that the claims weren’t true.

Davies has got dark brown hair and black eyes. Other information regarding his height, weight, etc. are under review.

The TV star Jordan Davies posts naughty comments on Isobel Mill’s Instagram! Know all about the past relationships of this womanizer!