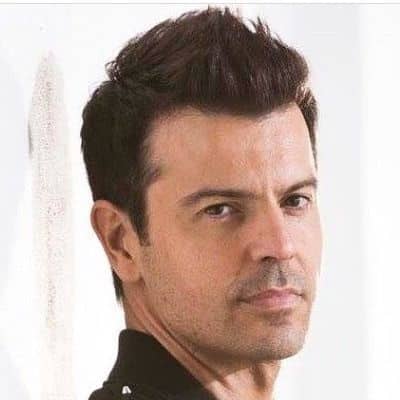 Jordan Knight is currently living a blissful conjugal life. He is married to a model Evelyn Melendez. Their relationship has been in an on-again-off-again with parting ways several times. At first, the pair dated from 1992 to 1996.

In between 1996-1997, Jordan dated an adult model and actress Shanna Moakler. There was also rumored that he was involved with model Jessica Huntington. Afterward, Jordan again got back together with Evelyn in 1998 and got engaged. In 2001, the couple again broke up but later reconciled.

On September 12, 2004, the couple tied the knot and he also dedicated the song “I’ll Be Loving You” to Evelyn at their wedding.

Who is Jordan Knight?

Jordan Knight is a renowned singer and songwriter from the United States. He is a lead singer of the boy band New Kids on the Block who rose to fame in the 1980s and 1990s.

Jordan was born on May 17, 1970, as Jordan Nathaniel Marcel Knight. He hails from Worcester, Massachusetts.

Jordon is the youngest child of Allan Knight (father) and Marlene Putnam (mother). Both His parents are Episcopal priests from Canada. When he was in junior high school, his parents got divorced.

He holds dual citizenship of Canada and America and belongs to mixed (English, Scottish, and German) ethnicity.

In 1984, Jordan joined Maurice Starr’s band New Kids on the Block at the age of 14 years old.  The band consists of five members including him they were Jonathan Knight (older brother), Joey Mclntyre, Donnie Wahlberg, Danny Wood. Prior to that, he played in a youth baseball league in Dorchester, Massachusetts.

Similarly, Jordan started to learn to play piano and keyboard on his own. His band sold more than 80 million records worldwide and made millions through their live concerts. However, the band split in 1994. Afterward, he started his solo career, and his first single, “Give it to You” came out in 1999. He released his second album, “Love Songs” under Transcontinental Records in 2006.

In 2008, the band again formed up after 15 years. Similarly, his third album, “Unfinished” was released on May 31, 2011, peaked at the number 8 on the US Billboard Independent Albums chart. Apart from musician, Jordan also appeared on television as the judge of the show American Juniors, a spin-off of American Idol. He has cast on the VH1 reality series The Surreal Life: The Fame Games in 2007 and 2011.

Jordan has been nominated for Best Dance Video in the MTV Video Music Awards in 1999. He was nominated for Favorite Male Singer at the 2000 Kid’s Choice Awards.

Throughout his childhood, Jordan deal with bullying and was ill-treated by his teammates because of his lack of аthlеtісіѕm. His teammates used to say that he threw the ball like a girl.

As of 2021, Jordan’s net worth is estimated to be $20 million throughout his music career. In addition, he has done endorsement for several brands such as Coca-Cola, Old Navy, Cottonelle‘s ‘Go Commando’ campaign, and more.

However, he has not disclosed his exact salary and other earnings till now.

The actor has an impressive height of 5 feet 11 inches tall. His weight is around 74 kg. Likewise, he has black hair color and Dark brown pair of eyes. He has a fair complexion with a dimpled smile.