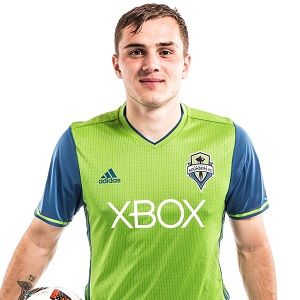 Jordan Morris is in a relationship with a stunning lady named Eliza D. Blanchette. She is a director of recruitment at Delta Gamma. However, their affair date and detail is not revealed yet.

Who is Jordan Morris?

Jordan Morris was born to Michael Morris, Leslie Morris on October 26, 1994, in Seattle, Washington, United States. His father is the Chief Medical Director of Seattle Sounders FC. He has two brothers Christopher and Julian and one sister Talia. His nationality is American and ethnicity is Native American.

His childhood wasn’t so easy for him, as he suffered from Type 1 diabetes at the age of nine.

Before starting his professional career, Jordan was college player of Stanford Cardinal from 2013 to 2015. After that, he switched to Seattle Sounders FC U-23 and played there until 2016. Furthermore, Jordan joined Seattle Sounders FC on January 21, 2016.

He made his professional career debut against Club on February 23, 2016, in the CONCACAF Champions League. From the beginning, he has been the key player for the side. As he played a vital role for his team in winning the MLS Cup.

For the national side, he made his first appearance in the U.S. under-20. In addition, he has scored for the U.S. under-23 national team on August 6, 2014. Jordan netted his first goal for the country on April 15, 2015, against Mexico. Since then, he has been always seen with the national team alongside Jozy Altidore, Clint Dempsey, and Michael Bradley. The magic moment came when he scored a late screamer against Jamaica in the 2017 CONCACAF Gold Cup Final.

In such a young age, he has achieved many honors that other players just dreamt of. He has won MLS Cup in 2016 with Seattle Sounders. Recently, Jordan has lifted CONCACAF Gold Cup in 2017 with the national team. He was also the MLS Rookie of the year in 2016.

Concerning in his earning he is the richest Homegrown Player of the club. Currently, he is earning $225,000 annually as a salary. However, his net worth is still unidentified.

Jordan Morris hasn’t been in any rumors yet. So far, he has pulled himself out from any controversy. His dedication towards his profession is too high that he didn’t even face any problems.

With a perfect height of 6 ft, Jordan Morris weighs 84 kg. His hair color and eye color is light brown. Furthermore, there isn’t information about his other body measurements.

Jordan Morris is winning the public’s heart through his playing styles. He is active on social media. On his Twitter and Instagram, he has around 42.9k and 56.4k followers respectively. This player is not active on Facebook.