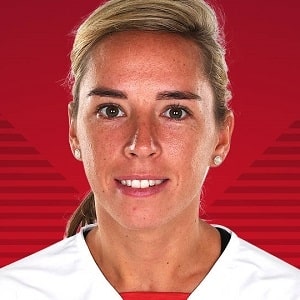 Jordan Nobbs has kept most of her personal life away from the media spotlight. There are no records available about her past relationships. At present, she is believed to be single.

Who is Jordan Nobbs?

Nobbs was born in Stockton-on-Tees on December 8, 1992. She is 26 years old. Her father, Keith Nobbs was also a professional football player. She has one older brother named Liam Nobbs. She is of British nationality. Furthermore, there is no detailed information relating to her ethnic background.

Talking about her education, Nobbs was previously associated with the Sedgefield Community College in Durham County. She played school level football for the same school when she was 16 years of age. She quit school after that and began playing professional football.

Nobbs joined Sunderland Association Football Club Ladies when she was 8 years of age. She made Sunderland first-team when she was 16 years old. In her first season there, Sunderland won FA Women’s Premier League Northern Division and came second in 2009 FA Women’s Cup Final. She was a very important player in the Sunderland line-up for two following years. Later, she was approached by Arsenal and she decided to transfer in August of 2010. Playing for Arsenal, most notably, she scored 2 goals and was also named Player of the Match on Continental Cup 2015 final as Arsenal won the match.

In her international career, when she was 13, she captained England U-15 and captained England U-17 a year later. In 2008, she led the team to fourth place at U-17 World Cup 2008. Additionally, she was a vital part of the winning team of the European U-19 Championship 2009. In 2010, she also played U-20 World Cup. However, her senior international debut was at the 2013 Cyprus Cup. She was named vice-captain in Cyprus 2015 and guided her team to victory in the absence of their captain due to injury. Furthermore, she got injured after only a game in the 2015 Women’s World Cup and was left out for the rest of the tournament.

Nobbs’s current salary playing for arsenal is around £16,510 per year. Additionally, she has other endorsements deals and national football team salary. However, she has not revealed her net worth.

Nobbs has kept her personal life away from the media spotlight. Additionally, she has not been part of any notable controversies in her career. At present, there are no rumors concerning her life and career.

Talking about her body measurement, there are no details available about Nobbs’s weight and body size. However, she stands 5 feet 3 inches tall. Her hair color is Blonde and her eye color is Brown.