Jordan North is not in a relationship with anyone currently and is single. He hasn’t been seen dating anyone in the past too.

Furthermore, he hasn’t shared any details about his girlfriend. 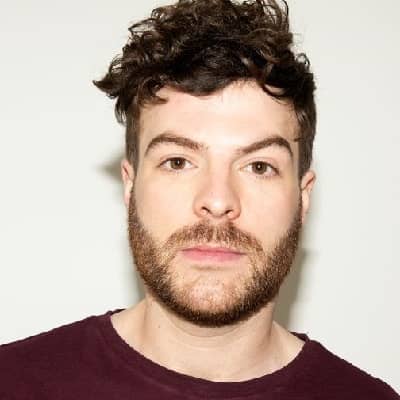 Who is Jordan North?

Jordan North is an English radio DJ and presenter who is popular for hosting shows on BBC Radio 1.

In addition, he has also presented the podcast, titled ‘Help, I Sexted My Boss‘ along with the social commentator and etiquette expert, William Hanson.

This star was born on 14 February 1990, in North Yorkshire, England. He grew up in Burnley, Lancashire.

Jordan was born to a military family, with his dad and brother both serving in the Armed Forces. His father’s name is Graham North, who served in the Queen’s Lancashire Regiment into the army. Likely, his mother’s name is Wendy North.

In addition,  Jordan is of British nationality and is of Anglo-Saxon ancestry.

He attended St. James’ Lanehead Primary School and was later transferred to Penwortham Priory Academy. Then he attended Preston’s College.

Talking about his graduation, he has a Bachelor in Arts- Media Production from the University of Sunderland.

After finishing his graduation, he started working in radio shows for such stations as Capital North East and Capital Manchester. Then he got the job at BBC Radio 5 Live as a researcher and producer. It was the initial stage of starting his career.

Working there for around 18 months at Rock FM, He left it and worked as a drive time presenter in the BBC Lancashire station in 2014. Also, it earns him nominations multiple times in the Radio Presenter of the Year category at the Commercial Arqiva Radio Awards.

Jordan then became a regular gig with BBC Radio 1 as a presenter in the weekend shows and Early Breakfast. In the year 2018, North was a featured member in the weekend line-up of BBC Radio 1. In March 2018, Jordan along with etiquette expert and social commentator, William Hanson launched his own podcast, titled ‘Help I Sexted My Boss’.

Its first season was a huge hit and the live show’s sales were within 10 minutes. The show provides different advice to listeners who have encountered modern-day problems. Additionally, the podcast is now in its sixth series and was also nominated for ‘Best Entertainment Podcast’ at the British Podcast Awards 2020.

At the end of 2018, he presented ‘Trending Live’ on 4Music and YouTube which adds his stardom. Furthermore, on 5 February 2020, North appeared on the children’s singing competition Got What It Takes? as a guest mentor during the program’s annual Radio 1 interview challenge.

In November 2020, it was said that North would participate in the 20th arrangement of I’m a Celebrity...Get Me Out of Here.

Jordan’s net worth is currently under review, but it must be around $1 million as of 2022.

He hasn’t performed any such activities that lead his names to be in the headlines of any rumors or controversies in the media.

Jordan North must be of average height and weight. Yet its exact measurements are unknown. Talking about his appearances we can say that he has light brown colored hair and eyes.

You may also read the bio of Patrick Starrr, Wells Adams, and Shaun Keaveny.