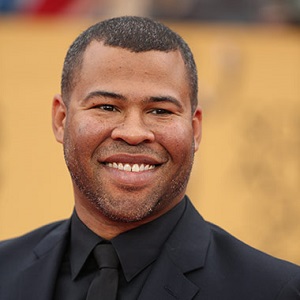 I'll say this: The scariest monster in the world is human beings and what we are capable of, especially when we get together

I want to believe in ghosts. I love ghost stories

Part of what horror is, is taking risks and going somewhere that people think you're not supposed to be able to go, in the name of expressing real-life fears.

Jordan Peele is a married man. He is married to the famous American actress and comedian Chelsea Peretti. The couple began dating each other in 2013. After more than two years of their affair, the couple became engaged in November 2015.

Following a five-month-long engagement, the couple got married in April 2016. In February 2017, they announced that they were expecting their first child and the baby(Beaumont Gino Peele) was born in 2017. Jordan and Chelsea have been married for a year now and their relationship is going very well.

Who is Jordan Peele?

Jordan Peele is an American actor, comedian, writer, producer, and director. He is best known for starring in the Comedy Central sketch series Key & Peele from 2012 to 2015. He is also famous for his five seasons as a cast member on MADtv. His directorial debut horror film Get Out was released in 2017 to critical acclaim.

Jordan Peele was born on 21 February 1979, in New York City, New York, USA. He is the son of an African-American father and an English mother. His father’s name is Hayward Peele and mother is Lucinda Williams.

He attended the Computer School for Junior High School. After that, he enrolled at The Calhoun School for high school and graduated in 1997. He then went on to attend Sarah Lawrence College as a member of the class of 2001. Jordan is an American by nationality and he is of African-American and English ethnicity.

Jordan Peele’s Career and Net Worth

Jordan Peele has been an active member in the industry since 2002. He regularly performed at Boom Chicago in Amsterdam and The Second City in Chicago. He portrayed a popular character called “Danish Supermodel Ute” during his time at Boom Chicago. Jordan hosted MTV’s Comedy Weekend in 2002.

In 2003, he joined the cast of MADtv for its ninth season. He completed 94 episodes of the show. He was also the writer of the show. Jordan left MADtv in 2008. He was nominated for a 2008 Emmy Award for his song “Sad Fitty Cent“.

In 2010, he co-starred in the FOX comedy pilot The Station. He also appeared with a recurring role in the series Children’s Hospital. He also had a supporting role in the comedy film Wanderlust.

The film opened at number #1 at the box office. He will now produce the upcoming HBO series Lovecraft Country. He has a net worth of 50 million dollars.

Jordan Peele has a height of 5 feet 8 inches. He has salt and pepper hair color and his eye color is dark brown.