Jordan Smith is the Best-selling artist in the history of The Voice. Jordan is married to his girlfriend Kristen. 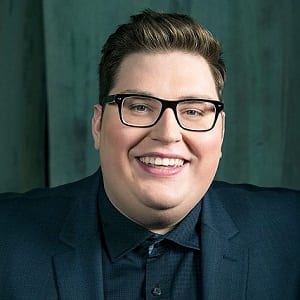 It’s extremely important for me to let everyone know it’s OK to be different.

I feel like it’s taken a long time for me to love different parts of myself. The world is hurting and searching, because we think there are flawed parts of who we are. It’s important to accept yourself and have confidence, and then you can love others.

Jordan Smith is a married man. He is married to Kristen Denny.

Jordan and Kristen met in 2012 at summer camp. They were best of friends and later started dating.

Who is Jordan Smith?

Jordan Smith is an American singer, songwriter, and musician. People mostly know him as the winner of 2015’s season of the singing competition ‘The Voice.’

He was also the highest-selling artist ever to compete on ‘The Voice.’

Smith was born Jordan Mackenzie Smith in Whitley County, Kentucky on November 4, 1993. Currently, he is 27 years old. He was born to parents Kelley and Geri Smith.

Both his parents are musicians hence he was exposed to the world of music from an early age. Jordan is of American nationality. Furthermore, his ethnic background is Caucasian.

Jordan Smith initially sang in the church choir in the congregation of House of Mercy. Additionally, he won the Poke Sallet Idol competition in 2012 at the annual Poke Sallet Festival. He garnered widespread recognition after he competed in season nine of NBC’s ‘The Voice.’ In addition, he chose to be in the team of Adam Levine.

Eventually, he won the competition and earned US$100,000 and a Republic Records recording contract. Jordan performed ‘You Are So Beautiful’ alongside David Foster at the 42nd People’s Choice Awards on January 6, 2016.

Smith released the studio album titled ‘Something Beautiful’ on March 18, 2016. The album debuted at No. 2 in sales in the iTunes Store. Additionally, he also released ‘’Tis the Season’ on October 28, 2016, and ‘Only Love’ on August 10, 2018. Jordan was the writer of ‘Ashes’ for the Deadpool 2 soundtrack. The song was performed by Celine Dion.

Smith became the grand marshal of the Kentucky Derby Festival Pegasus Parade in May 2016. Additionally, he has received the HMMA Award and Halfway Award nominations.

His net worth is $2 million according to the sources. He has not revealed his current salary.

Smith has not been part of any notable controversies in his career. In addition, at present, there are no rumors concerning his life and career.

Smith is active over social media and has a youtube channel.