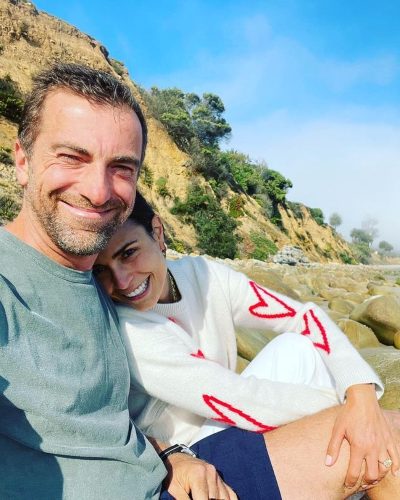 Jordana Brewster is engaged! Jordana announced her engagement with boyfriend Mason Morfit on Instagram. She shared a picture of herself wearing a ring while leaning towards her fiance. She captioned it,

Likewise, the same day, she was photographed wearing her engagement ring while walking around Hollywood with her fiance. During their stroll, Jordana wore ripped jeans, a white shirt, and a summary yellow cardigan. She carried a black shoulder purse, flats, and a mask.

Her good-looking fiance rocked his plain T-shirt and jeans. He was busy on his phone while the pictures were taken. The couple has been linked with each other since July 2020. She revealed,

“Mason and I had met once, while we were both still married, four years ago. I took note of Mason; he was cute, charming. Shortly after that lunch I started following him on Instagram. Four days after I separated from Andrew, I was on a plane to San Francisco to visit this man I had met only once but who had stayed on my mind.”

At the time she revealed that she is already planning to get married but does not want to rush. So we might hope a wedding is on the way.

Also read Jordana Brewster and her producer husband Andrew Form are divorcing after 13 years of marriage!

Who is Mason Morfit?

Mason Morfit is the CEO and Chief Investment Officer for ValueAct Capital. He is a member of the firm’s Management Committee. Likewise, he is a former director of Advanced Medical Optics, Inc., C.R. Bard, Inc., Immucor, Inc., Microsoft Corporation, and more.

Also, Morfit is a member of the Advisory Council for Princeton University’s Woodrow Wilson School of Public and International Affairs. He is also the Board of Directors of the Tipping Point Community.

Jordana Brewster is an American actress and model. She is best known for her role as Mia Toretto in the Fast & Furious movie series. Her role in the 2009 movie Fast & Furious earned her a Teen Choice Award for Choice Movie Action. She is also popular for her recurring role as Nikki Munson in the series As the World Turns (1995-2001). Read more bio…

Kate Hudson is engaged! Who is her fiance Danny Fujikawa?
Tags : Actress Model