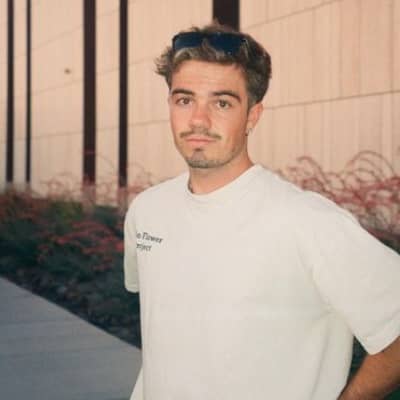 Jorden Beau is currently single. he is now currently focusing on building his career rather than being involved in romantic relationships. He hasn’t shared the details about his personal life.

He used to date a professional dancer Jordyn Jones. However, they have separated their way and moved on with their life.

Who is Jorden Beau?

Jorden Beau is a well-known YouTuber, comedian, and social media personality. He is a YouTuber who has millions of subscribers on his channel.

Along with his brother, he is well-known for releasing comedy, challenges, stunt shots, and other films on his channels. He is also well-known on his Instagram, where he has amassed a sizable fan base.

He and his brother Jeremy used to run the ‘Beau Bros’ YouTube channel together before the latter departed to join the fire school. Jordan has now renamed the channel after himself and has started uploading material centered on his personal life.

Jorden Beau was born with American nationality on November 24, 1998, in Encinitas, California. He is currently 24 years old and of the Caucasian race. He also believes in Christianity and was raised in a Christian home.

His mother, Kathleen Neau, was a homemaker, and his father’s name is unknown. However, he has revealed his occupation as a businessman. He also has an older brother named Jeremy Beau, who is a professional Youtuber.

He can also be spotted on his YouTube account from time to time. He had an exciting childhood in amusing those around him, so he began his own YouTube channel at a young age to reach out to a huge number of people all at once.

Jorden Beau finished his elementary education at a local high school in Encinitas, California. He has kept his educational background and achievements hidden. He has not revealed what major he is pursuing his degree in or graduated from his university.

Jordan Beau began his career as a YouTuber in 2016 when he and his elder brother Jeremy founded the Beau Bros YouTube channel. Jordan renamed the channel after himself and has been uploading footage of his own life after his brother departed to join the fire academy.

They started their channel in February 2016, and the first video was released in March of that year. Within a few weeks, they posted their first video. The video, titled ‘Beau Bros | Channel Announcement + Riding!,‘ depicts the brothers performing freestyle scootering and skating. They are also shown deliberating over alternative channel names before settling on Beau Bros. Their initial content focuses on scootering, skating, sledding, and vlogging.

Jordan has made several adjustments to the channel and its programming after Jeremy departed to join the fire academy. He renamed the channel after himself and started uploading more vlogging footage. Jeremy still appears in Jordan’s videos on occasion, but he is now working on launching his own fitness-related channel.

A backup channel named Beau Bros 2 is also available. It was founded in September 2017 and has over 6.76k subscribers and over 4.8k views. The brothers do not post there on a regular basis.

Over the next several years, the channel developed at an exponential rate, amassing over 630 thousand members and more than 65 million views. Jordan is also quite famous on other social media networks. Now he has his personal name the youtube channel @JordanBeau2 which has 1.2M subscribers with a range of 12k views.

Jorden Beau is not an actor who has worked in the entertainment industry by acting in a variety of television shows and films. He has not mentioned receiving any honors or nominations. However, he has developed his own fan base through his youtube channel, and many people watch and like his videos. Perhaps in the future, he will be recognized for the work he has created.

Jorden Beau, also known as @jordanbeau, is an active user of Instagram. He is an active member of this social networking site, with 495k followers and 2160 posts. We can view several images of him on Instagram. He has also shared the video with his friends and family. He also released a video of himself playing basketball, demonstrating his fitness obsession. He just shared a video of a child failing over and over again and then getting back up and learning from his errors. His most recent video was a crash-fall clip.

Similarly, He started Twitter in June 2014 and has accumulated 60k followers with over 8k tweets. He also has a TikTok account called @JordenBeau, where he has 894.8k followers and 32.6M likes. He has two channels on YouTube. His initial channel, @BeauJordan, has 20.7 thousand subscribers, while his primary channel, @JordenBeau2, has 1.2 million members.

Jorden Beau is a youthful, nice, and attractive man. He has a powerful and appealing physique. He has a muscular body type since he enjoys working out and is a fitness enthusiast. He has a height of 5 feet 8 inches and a body weight of 79kg. He has not revealed his physical measurements in the public, such as his hips, waist, and biceps. According to his appearance, he has a white complexion, dyed black-grey hair, and blue eyes.

Jorden Beau has not been in any rumors or scandals. He has received attention for his TikTok video and the YouTube channel he has created. He has effectively balanced his personal and career life. Beau has never been involved in any bad rumors that hamper his career. He has always avoided controversies that might harm him.

Jorden Beau’s predicted net worth in 2022 is $1 million, according to the source. His primary sources are his YouTube channels and TikTok videos. He also earns money through brand endorsements, photoshoots for various projects, and advertisements. Through Beau’s hard labor, he is able to enjoy a luxurious life. However, he has not disclosed the value of his assets and the businesses he owns.

Find Out How Megan Thee Stallion and her Boyfriend Pardi Celebrated Their 2-Year Anniversary!