Updated On January 29, 2023 | Published By: prasha singh
Share this
Married 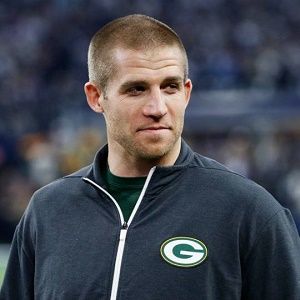 No one on this team has doubted Dylan. We knew once he got back from what happened to him a couple years ago, he'd be ready to roll. He's there.

What is the relationship of Jordy Nelson?

Jordy Nelson is a married man. In 2007, Nelson married his girlfriend Emily Nelson. She is a teacher at Fort Howard Elementary School in Green Bay.

They both have three children named Royal(son), Brooks(son), and Jo(daughter). Their third baby is adopted.

Who is Jordy Nelson?

Jordy Nelson is a former American football wide receiver. He plays for the Green Bay Packers of the National Football League. He is an All-America honor.

In 2016, he became NFL Comeback Player of the Year and in 2017, he won the Best Comeback Athlete ESPY Award.

Jordy Nelson was born on May 31, 1985, in Manhattan, Kansas. His nationality is American and his ethnicity is Swedish.

His mother’s name is Kim Nelson and his father’s name is Alan Nelson. He has a sister, Kelsey Nelson, and a brother, Mike Nelson.

His great-grandfather had emigrated from Sweden and had established ‘The Nelson farm’.

He went to Riley County High School in Riley, Kansas for his early education. Jordy was interested in football from the start and he played football for the Falcons during his school days.

He then attended Kansas State University.

Jordy Nelson began his college career as a walk-on at Kansas State and took his redshirt year as a member of the Wildcats’ 2003 Big 12 Championship team. He earned consensus All-American honors and was a finalist for the Biletnikoff Award, which is awarded to the most outstanding receiver in college football, after catching 122 passes for 1,606 yards and 11 touchdowns.

He played there for several seasons. Later after his college career, he was selected by the Green Bay Packers with the fifth pick in the second round of the 2008 draft on April 26, 2008. It has been 8 years of his career and he continues playing for Green Pay Backers. He is on contract with his present team.

Several awards and rewards have honored him. In 2009, Nelson played in 13 games for the Packers, catching 22 passes for 320 yards and two touchdowns. He also saw action as the primary kick returner for most of the 2009 season.

In 2010, Nelson set career highs in receiving yards (582) and catches (45), while catching 2 touchdown passes for the third straight year. He earned a $13 million contract extension with the Packers after his outstanding 2011 season. In 2012, Nelson played in 12 games, starting ten; he missed four games and most of another two due to a hamstring injury.

In 2013, he started all 16 games for the first time in his career and was again named a Pro Bowl alternate. In 2014, he signed a four-year extension worth $39 million, receiving an $11.5 million signing bonus toward a guaranteed $14.2 million. MRI scans deemed that Nelson had torn the ACL  in his right knee in 2015.

He was named AP Comeback Player of the Year after the 2016-17 season. On 27 March 2019, this player retired from playing football.

Jordy has an estimated net worth of $25 million as of 2022. His salary is not known.

Currently, there are no details regarding Jordy’s rumors and controversy. He also has never been subject to any controversy regarding his personal and professional life.

Jordy Nelson has a height of 6 feet 3 inches. His body weighs 98kg. He has light brown hair and hazel eyes.

Aaron Rodgers Partied with all might At Randall Cobb’s Wedding!