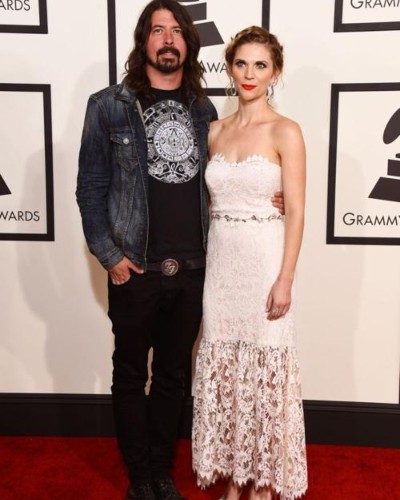 Jordyn Blum is the wife of Dave Grohl. Blum started her career as a model but was offered to work with some of the best fashion brands. She featured on the cover of Teen Magazine when she was just 17 years old. After leaving the modeling field, Jordyn worked as a producer at MTV. In the year 2002, Blum directed Foo Fighters documentary.

Jordyn Blum and Dave Grohl met each other in 2001. When Dave was with bandmates at the Sunset Marquis hotel in Los Angeles, he found out that he was there to help his bandmate, Taylor Hawkins. He was Taylor’s wingman on a date he had planned. Jordyn was there but Dave was way too nervous to talk to her.

He gulped in some drinks to get the courage to talk to her. Being fully drunk, he scribbled his number on a piece of paper with the words ‘you’re my future ex-wife’. She was impressed with him and they started dating shortly.

Dave Grohl was absent most of the time but things changed when they welcomed their daughters. He gets up early to get his day starting and revealed,

Dave struggled to be part of the family as he is at work most of the time. He felt that his family was hiding from him. In spite of all those, they can be seen talking to their daughters on vacation.

Also read Who is Charlie Bigelow? Are Charlie and Elisa Donovan still married? Also, know about his solo parenting skills

Jordyn Blum is an American former model and director who is mostly known for her work in Foo Fighters: Walking a Line and The GQ Men of the Year Awards.

She is famously known more as the wife of Dave Grohl. Read more bio…