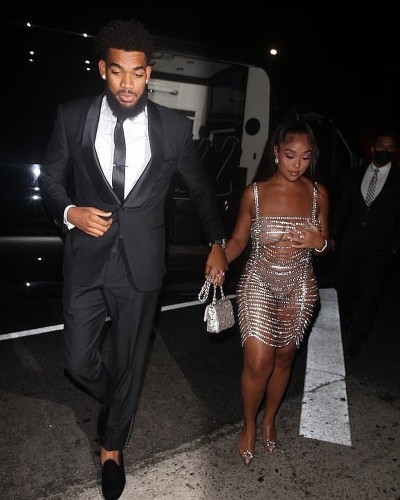 Jordyn Woods had a blast at her pre-birthday celebration! On 18th September 2021, she celebrated her 24th birthday in West Hollywood. Woods celebrated with her friends and boyfriend Karl-Anthony Towns. For the celebration, she wore a see-through dress that had a number of strings of shining jewels that were reminiscent of outfits previously worn by Cher and Amber Rose.

She completed the look with high-heeled shoes to match her outfit. Similarly, Jordyn carried a sparkling purse with her as she made her way into the party and was accessorized with a pair of hoop earrings and a jewel-encrusted watch. Also, she styled her dark brunette hair which was styled into a ponytail that ran down her backside as she attended the event.

How much is the net worth of Jordyn?

Jordyn has an estimated net worth of $6 million. She is modeling for the modeling agency Wilhelmina International. In 2018, she released her street style activewear line SECNDNTURE. Her boyfriend Karl Anthony has a net worth of $9 million.

Also read All about the relationship of Karl Anthony Towns and Jordyn!

Jordyn is an American social media star and a model.

Moreover, she is also recognized as Kylie Jenner’s ex-best friend with whom she had a feud with.

She is one of the most popular plus-size models in the USA. Read more bio…