Jorge Ramos is a Mexican-American writer and journalist. He is a father of two.

Jorge Ramos has been married twice. Initially, Jorge tied the knot with Gina Montaner in 1988.

As a couple, they had also welcomed a baby daughter named Paola. However, they couldn’t continue to carry their married life for too long and got separated in 1992.

Soon after divorcing, Jorge again married Lisa Bolivar in 1992. Furthermore, Lisa gave birth to a son, Nicolas. Same as his first marriage. Jorge’s second married life also couldn’t go well and they called it quit in 2005. Besides this, he has also several affairs with a couple of actresses.

Currently, he is in a relationship with Venezuelan TV host and actress, Chiquinquira Delgado.

She also has two daughters from her previous marriage. The couple has been seen together since 2011. As of now, they are enjoying their company and living happily. 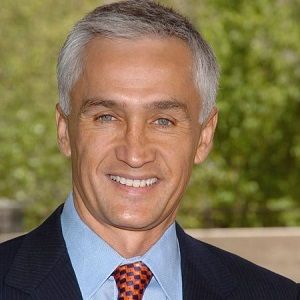 My only advice is, follow your dream and do whatever you like to do the most. I chose journalism because I wanted to be in the places where history was being made.

When it comes to racism, discrimination, corruption, public lies, dictatorships, and human rights, you have to take a stand as a reporter because I think our responsibility as a journalist is to confront those who are abusing power.

Who is Jorge Ramos?

Jorge Ramos is a Mexican-American writer and journalist. He is one of the most famous and extraordinary journalists in the United States and is often considered the best Spanish-language news anchor in the country.

Furthermore, Jorge is regarded as “The Walter Cronkite of Latin America“. Currently, he is hosting the Univision news television program Noticiero Univision.

In addition, he has also won eight Emmy Awards and the Maria Moors Cabot Prize. Additionally, Jorge has been listed on Time magazine’s list of “The World’s 100 Most Influential People”.

Jorge was born on March 16, 1958, in Mexico City, Mexico. As of 2021, he is 63 years old. He grew up in the Bosques de Echegaray alongside his siblings and mother, María de Lourdes Ávalos Blanco.

His ethnicity is Mexican and his father was an architect.

As per his education, Concerning his education, Jorge completed his graduation at the Universidad Iberoamericana in Mexico City with a degree in manor communications.

Later, he moved to Los Angeles on a student visa and joined UCLA Extension’s journalism classes.

Additionally, Jorge became the host for Noticiero Univision along with Maria Elena Salinas. Since then, he has been hosting the show. Furthermore, the veteran journalist is also the anchor of a Spanish-language public affairs program, Al Punto. In addition, Jorge has been also presenting an English-language news magazine America with Jorge Ramos on Fusion TV.

Besides presenting the show, Jorge has also covered some of the major news such as the Salvadoran Civil War, the Persian Gulf War, the disintegration of the former Soviet Union, and the 9/11 terrorist attacks. Apart from that, he has interviewed many political leaders such as Barack Obama, Bill Clinton, George W. Bush, Fidel Castro, Daniel Ortega, and much more.

American Latinos listed him as the most trusted and influential Hispanic in America. Moreover, his Q Score among Latino audiences ranked him between Lionel Messi and Shakira. As an author, the Univision anchor has also published some popular books which consist of No Borders, Dying to Cross, A Country For all, The Other Face of America, and much more.

So far, Jorge has received several awards and honors in his career. He has lifted eight Emmy Awards and the Maria Moors Cabot Prize for excellence in journalism. Moreover, he was also ranked in “The World’s 100 Most Influential People”.

Being a successful journalist and author, Jorge bags a massive amount of money. Currently, she receives a whopping amount of $3 million as an annual salary. As of 2022, he has a net worth of $15 million.

Once, Jorge asked Donald Trump asked about the candidate’s controversial immigration proposals at a press conference. But Trump told him to sit down and said, “Go back to Univision”.

Soon after that, Ramos denied to sit down and security escorted him out of the room. Furthermore, there was a rumor that Univision could fire Jorge after the incident with and Donald Trump. However, the news came as false.

Jorge Ramos has a height of 5 ft 8 inches and his weight is unknown. Furthermore, he has beautiful blue eyes and light hair. There is no information about his dress size and shoe size.

Being a journalist and author, Jorge is hugely active on social media. Moreover, he regularly keeps posting on his social media accounts.