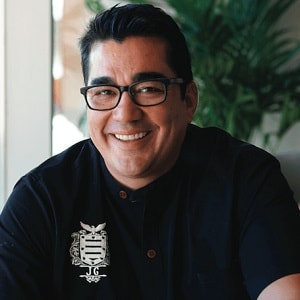 Jose Garces is a married man. It is known that he is currently living with his wife and two children. His wife’s name is Beatriz Garces. They were married on August 3, 2002. Their daughter’s name is Olivia and their son’s name is Andres. They neither like to talk about each other in media nor like to upload pictures of themselves.

Who is Jose Garces?

Jose Garces is an Ecuadorian-American chef, Iron Chef, and restauranteur and he is famous for winning the second season of the Food Network reality series, ‘The Next Iron Chef’. He was awarded the James Beard Award for Best Chef: Mid-Atlantic.

He joined Gordon Tech and graduated from there in 1990 and later joined Culinary Arts at Kendall College in his hometown of Chicago, Illinois.

He became Iron Chef America in 2008 in which he won against Bobby Flay and became one of only eight chefs in the country to hold the prestigious title of Iron Chef. He became the winner in 2009 in James Beard Foundation’s prestigious award, ‘Best Chef, Mid-Atlantic’.

Jose Garces: Net Worth and Salary

He has not revealed any information about his salary and net worth so, it is hard to predict. However, it is under review.

Chef Jose Garces has to sell his restaurant group to the Lousiana based Ballard Brands. The group was sold for $5 million. The main reason is that he had been sued for underpaying multiple vendors.

He has got grey hair and brown eyes. He weighs 82 kg. Other information about his height, dress size, etc. are not available.