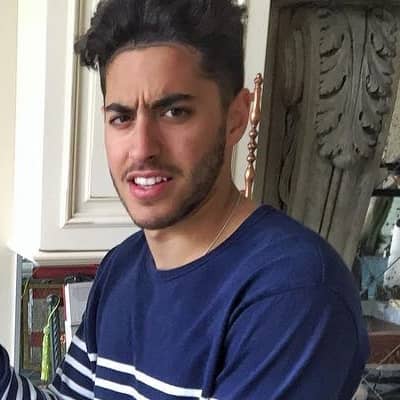 Joseph Wakile is at present possibly not taken. He has not shared details regarding his girlfriend or affair.

Joseph Wakile is a Lebanese-American reality star and an estate agent. He was seen in a Bravo TV’s reality show The Real Housewives of New Jersey.

Also, he is the son of the reality star, Kathy Wakile.

He was born on 14 March 1996 in New Jersey, the United States. Moreover, his father, mother’s name is Richard and Kathy respectively.

Joseph’s descent is Lebanese-Caucasian. He has not disclosed details of his studies.

His sister Victoria exchanged vows with Teddy Kosmidis in mid-Feb 2021 at a lavish wedding.

Joseph Wakile started to gain fame after appearing in The Real Housewives of New Jersey S3. He was cast as the son of Kathy Wakile.

Prior to screen appearance, he worked as an event coordinator in a church’s youth group. He is also a real estate agent and began his career in 2015.

He has earned a predicted net worth of $500k at the current time. The average salary received by him is unknown.

On the other hand, his dad, Richard has a net worth of $5 million. He opened a restaurant, Pizza Love in Sep 2017 with his wife. He also owns a chain of gas stations.

Also, his mother, Kathy has assets worth $5 million.

This reality actor’s child is at present keeping himself away from rumors or any desperate scandals. But recently, he commented on his cousins Melissa and Joe Gorga.

They did not attend his sister’s wedding and he referred to them as farm animals.

Regarding Joseph Wakile’s body features, his height and his body weight are average. In addition, he has light brown colored eyes and his hair is in black color.

He has a fit body and often posts topless pictures on social networking sites.