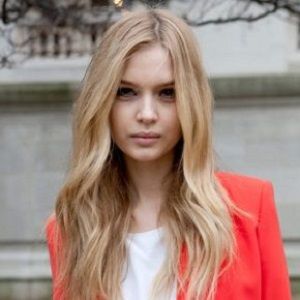 It's a really lighthearted fragrance that's fruity and floral. From the moment you smell it, you're like OK, this is definitely a fragrance that you want to wear with a cute sandal and sundress. It's a scent that you just want to have fun in!

What is the relationship of Josephine Skriver?

Josephine Skriver is an unmarried woman till now. She is currently in a relationship with the famous American singer-songwriter Alexander DeLeon. The couple has been together for a while now. There is no exact information about when the couple began dating each other. They have been dating each other for a few years now and their relationship is going very well. There is no other record of her past and present relationship. It seems like Alexander is the first love of her life.

Who is Josephine Skriver?

Josephine Skriver is a Danish fashion model. She is best known for being a Victoria’s Secret Angel. She is also recognized for her work with Gucci, DKNY, and other major fashion lines. She has worked the catwalk in over 300 fashion shows since her first full-time season in 2011.

Her mother is an IT analyst and her father is a marine biologist. Her parents are both gay. She has a younger brother named Oliver Skriver. At the age of 15, Skriver was discovered and approached about her modeling potential while on a trip to New York with her soccer team. After that, she was signed by Unique Models, an international modeling agency based in Copenhagen.

She was consequently approached by other agencies outside of Denmark but decided to wait to stay in school. After finishing school, she began pursuing a modeling career in 2011.

Skriver began her career as a model in 2011. During her early career days, she walked for many other prominent designers, like Calvin Klein, rag and bone, Gucci, Dolce & Gabbana, Givenchy, Yves Saint Laurent, Valentino, and Alexander McQueen.

Throughout her career, she has done ad campaigns for brands such as H&M, Dior, Gucci, Bulgari, and much more. Skriver has appeared in catalogs and ads for Victoria’s Secret and walked in the Victoria’s Secret Fashion Show every consecutive year since 2013. She became an official Victoria’s Secret Angel on February 19, 2016. In 2015, Skriver became a celebrity ambassador for the Family Equality Council.

Josephine Skriver: Salary and Net Worth

Her salary is undisclosed. She has accumulated a net worth of 12 million dollars as of 2022.

Do you love the beauty of Victoria’s Secret Angels Stella Maxwell and Josephine Skriver ; So here is the beauty secrets of both actress