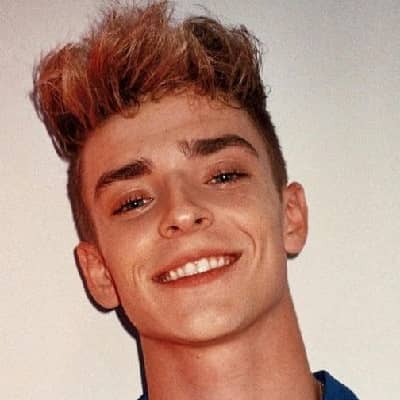 What is the relationship of Josh Beauchamp?

Josh Beauchamp doesn’t appear to be in any love affair as of now. So, he is possibly single.

Currently, he is more focused on his career rather than any love affair. In further days, if he revealed anything about his love life then we will update it.

He has a big friend circle but he has kept his romantic life low key.

Who is Josh Beauchamp?

Josh Beauchamp is a Canadian-American dancer, singer, choreographer, and social media personality. He is best known for being part of a prominent dance crew like ImmaBeast and Now United.

Josh’s full name is Joshua Kyle Beauchamp. The singer was born on March 31, 2000, in Edmonton, Alberta, Canada. He holds the duo nationality of America and Canada and belongs to Caucasian descent.

The name of his parent’s is Ron Beauchamp and Ursula Beauchamp. His father is a dentist whereas his mother is a dental hygienist by profession.

He is the eldest child of his parents and he has two little brothers named Jaden Beauchamp and Jonah Beauchamp.

Moving towards his academic background, he lately graduated from high school in 2018 but hasn’t yet revealed his academic institution details.

From an early age, Josh had a passion for dancing and singing so, his mother took him to dance lessons. At the age of 14, he moved to Los Angeles to take a class at the prestigious LA dance school, Movement Lifestyle.

Beauchamp has won one of the editions of the K-Days Talent Search contest. He competes in various local dance competitions until being part of a big dance group like NXG Company. In 2015, he later selected as one of the members of the group ImmaBeast.

Afterward, he became a member of Now United, a group of eighteen members (as of now there are 18 people in the group) from different eighteen countries who represent their own country. The group was created by Simon Fuller in 2017.

In 2018, he participated in the second season of the American reality competition television series, World of Dance in the junior division alongside fellow dancer Taylor Hatala in a routine choreographed by Carlo Atienza.

Lately, he had featured in Bieber’s music video, ‘That’s What Love Is’ in 2020 where he danced along with Charlize Glass. Besides, he has collaborated and shared the stage alongside top dancers like Dytto, Kaycee Rice, and so on.

Similarly, after he joined the Now United dance crew he also started taking singing lessons. Recently, he recorded a cover of Justin Biber’s song ‘Home To Mama’ in January 2021.

In 2020, he won BreakTudo Awards as International TikToker. Furthermore, his dance crew, Now United has been awarded and nominated in numerous awards shows some of are enlisted below with category,

A while time ago, Beauchamp was criticized on Twitter by fans of the K-pop group when he said that he helped a choreographer for some k-pop group to create some of their choreography.

After the negative reaction by k-pop fans, he deactivated his Twitter account for a while and he later returned after positive messages from several fans.

Besides, he suffered a lot of bullying and exclusion from his colleagues at his early age. After all, like every Canadian kid people expected him to play hockey whereas they think that dancing was a sport dominated only by women.

As per other online sources, Josh has an estimated net worth in the range of $300 thousand to $500 thousand throughout his multi-profession. However, his exact salary and yearly income haven’t yet disclosed.

According to the neuvoo.ca report, the average salary of a professional dancer is about $47,775 so, it is sure that he earned around the estimated amount per month.

Josh has a well-maintained and athletic physique with a handsome look. He stands at the height of 5 feet and 10 inches tall whereas his weight is around 70 kg. He has attractive blue pair of eyes with light brown hair color.