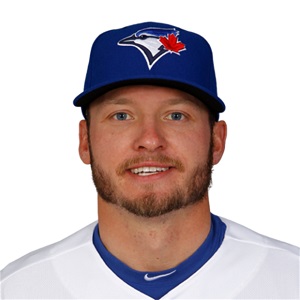 Right now you're just trying to win series, but when you come in and win the first two, your goal is the win the next game.

Josh Donaldson is an unmarried man till now. He has been in a few relationships in his life. He dated Jillian Rose for two years. The couple began dating each other in 2013. They separated in 2015. After that, Josh began dating Briana Miller in 2016. Josh and Briana have been together for over a year now and they are living a happy life. There are no other records of his past and present relationships. Josh doesn’t have any children until now.

Who is Josh Donaldson?

Josh Donaldson is an American professional baseball player. He currently plays as a third baseman for the Toronto Blue Jays of Major League Baseball (MLB). He was named the American League Most Valuable Player for the 2015 MLB season.

Josh is first Blue Jays player to be named MVP since George Bell in 1987. He was also named to the 2015 MLB All-Star Game.

Talking about the early life he was born on December 8, 1985, in Pensacola, Florida. His birth name is Joshua Adam Donaldson. He is the son of Levon Donaldson and Lisa French Donaldson. Josh has not revealed any information about his childhood life. His nationality is American and he is of Native American ethnicity.

For high school education, Josh attended Pace High School in Pace, Florida. After a year, he transferred to Faith Academy in Mobile, Alabama. While at the Academy, he played football, basketball, and baseball. At that time, he became the Alabama Gatorade Player of the Year. As a footballer, he played as a wide receiver, defensive back, and punter.

He then attended Auburn University. While at the University, he played baseball as the third baseman for the Auburn Tigers baseball team in the Southeastern Conference.

He started his baseball career professionally in 2006.  He began playing for the Harwich Mariners of the Cape Cod Baseball League in 2006.  The following year, he was named a Louisville Slugger Preseason All-American. In 2007, the Chicago Cubs drafted him as a catcher in the first round of the 2007 MLB Draft. He spent three seasons with Chicago Cubs and joined Oakland Athletics on April 30, 2010.

He then made his debut for the Oakland Athletics that same night as a pinch hitter. The Oakland Athletics traded him to the Toronto Blue Jays on November 28, 2014. The following year, he was named the American League Player of the Week for the second time in his career on June 1, 2015.

Josh signed a two-year, $28.65 million extension with Blue Jays on February 10, 2015. Since then, he plays as a third baseman for the Blue Jays. In 2015, he won the Sporting News Major League Player of the Year award.

He has an annual salary of 17 million dollars. His net worth is unknown.

St. Louis Cardinals has shown interests in Josh Donaldson. He is currently struggling at Blue Jays and rumors are that he might join St. Louis Cardinals this season. In November 2016, Josh had a rough argument with Blue Jays’ manager. He showed his anger with his manager in the dugout after he slammed his bat in frustration following a third-inning strikeout.

Josh is 6 Feet and 1 Inch tall. His weight is 95 kg. There is no information about his body measurements. He has blue eye color and lights brown hair color.