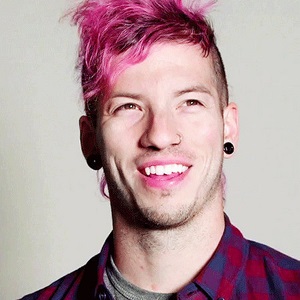 As I've told Tyler, there's not a really easy place between being single and being married for us now. We're just so busy that the logistics of our career make dating impossible. I think I'll find a girl at some point that makes all of the extra work and effort that needs to be put into it worth it. But for right now, I just date my drums

We're always trying to outdo ourselves, trying to do better, trying to write better songs. I think we want to inspire other people as well, so that's what we'll try to do through future songs

After talking to people and meeting them every day, I realize that a song can be written from one perspective with an objective in mind. What is crazy about it is that many different people can take one song a totally different way. That is so cool, since music is a universal thing and a very personal thing.

Talking about his personal life, Josh Dun was in relation with a multi-talented person, an actress, singer, musician, songwriter and record producer, Debby Ryan. They two began dating each other since May 2013.

However, due to some issues and controversies, Josh and his girlfriend Debby broke up from their love affair in September 2014. Following the tragedy, Josh is single again. Josh has never been married but likes to get married in future. A lot of women, who have dreamed him to be their dream guy, can try out their luck.

Who is Josh Dun?

Josh Dun is an American musician. He is the drummer and percussionist for the musical duo Twenty One Pilots and also been a former live drummer for House of Heroes. He is best known for his work with Adele and Katy Perry.

He was born in the year 1988 June 18 at Columbus, Ohio, United States. His nationality is American and ethnicity is mixed(English, French, Irish, German, Scots-Irish, Scottish, Welsh, as well as distant Belgian and Swedish).

His mother’s name is Laura Lee McCollum and father’s name is unknown. Josh was born in the family where he was blessed with three siblings, two sisters named Ashley and Abigail and a brother named Jordan. He is interested in the Indie pop, alternative rock, indietronica and rap rock genres of music.

According to Josh himself, he told that during his childhood, he was not allowed much to listen to music, however; he would speak to the nearby music store and ask for suggestions on music from people. He has been active in the field of music as a drummer since 2011.

He can play the usual drums as well as the electronic drums very well. Initially, Josh has worked at Guitar Center for three years. Josh debut his career as a drummer joining at House of Heroes in the year March 2010.

After some, while began out of band, he got away into Twenty One Pilot. Josh Dun left his job at Guitar Center in order to help the band’s lead singer Tyler Joseph in a show. Since then, Josh became the full-time member of the band.

The duo released the band’s second album Regional at Best in July 2011 and the third titled vessel in 2013. With the dashing personality and the marvelous talent of beating the drums, he has won the hearts of many people.

Josh Dun: Salary and Net Worth

He has a net worth is 2 million dollar but his salary is not revealed yet.

Once, Josh Dun is rumored to have hooked up with Ashley Frangipane.


He has a good height of 5 feet 10 inches with bodyweight 75kg. He has a black hair color and his eye color is light brown.