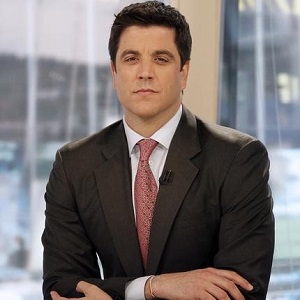 A good meal is very important to me. When I have a bad meal, especially out, it's like I'm sitting in an airport during a flight delay. It's a part of my life I can't get back

Be prepared to fall out of love with your words. I'm still too verbose at times

Whenever I grump when the alarm goes off, it's immediately replaced by, 'But I get to leave my office at 11 A.M. and be with my daughter all day.

Josh is a married man. He is married to Liz Cho. Liz is a local news anchor at WABC-TV. The couple dated since 2012 and decided to get married in 2014.

They tied the knot on 11 July 2015 in Montecito, California. The wedding was held at Villa Sevillano officiated by Sam Champion, who is Josh’s colleague on The Weather Channel. There were 70 guests present during their wedding ceremony.

Prior, he was married to an Indian girl named Priya Narang. They had a daughter together Sarina Elliott. Later they ended up with divorce after the issue that Josh was a sex addict and had a relationship with other women. The custody of their daughter is taken by the mother. Josh meets with his ex and his daughter on holidays.

Who is Josh Elliott?

Josh Eliott is a familiar name in the field of journalism. He is renowned for his work in ABC’s morning hit show called Good Morning America (GMA).

Currently, he is on CBS news. Before this, he used to work as a news anchor in GMA and has also remained as the sports anchor for NBC’s sports news, and co-anchor in ESPN’s live telecast show of sports center.

Elliott was born on 6 July 1971, in Los Angeles, California, United States. His nationality is American and his ethnicity is Jewish.

He didn’t have an easy childhood. He is born to Susan but was kept for adoption and was adopted by a couple, Charles Elliott(father) and Toni Jordan(mother) in Los Angeles, California.

Later his father came out as gay when he was just 13 years old. The couple divorced and his father died due to cardiomyopathy when Elliott was 15.

Josh wanted to expand his horizons and joining sports illustrated was probably the best idea to get started on his journey. There he worked for six years catching up on some major sports events.

He also worked as a producer in Galaxy Productions on television. Then he moved to 20th Century Fox, initially in comedy development and later in Physical Development.

Josh did his schooling at Loyola High School in Los Angeles and graduated with taking a major in English Literature at the University of California at Santa Barbara.

He had enrolled in UCSB‘s to join the men’s water polo team but later ended up working at the university paper “The Daily Nexus”.  After this, he received his master’s degree from Columbia University’s Graduate School of Journalism.

Elliott was first seen on ESPN as a panelist in “Around The Horn” and “Jim Rome” Is Burning. Plus he has also served as guest co-host for COLD PIZZA on ESPN2 on his earlier days. He has hosted ESPN Classic, classic now, has contributed to ESPN magazine and the website ESPN.com.

Then he has worked as a substitute anchor on ABC World News. Later he left ABC and joined NBC News and only after two years he left NBC and served as a lead anchor in its digital news service CBSN.

He has a net worth of $5 million but his salary is $2 million.

Josh Elliot made huge fans after his work as ABC news anchor. He is a man with a great personality perfectly suited for anchoring journalism and public speaking.

But it comes out to hear that he is gay. He questioned himself about his sexuality and seemed confused. This might be a feeling just because of the influence of his father.

Moving towards his body measurements, he has brown hair color and his eye color is also brown. There is no information about his height, weight,… and shoe size.