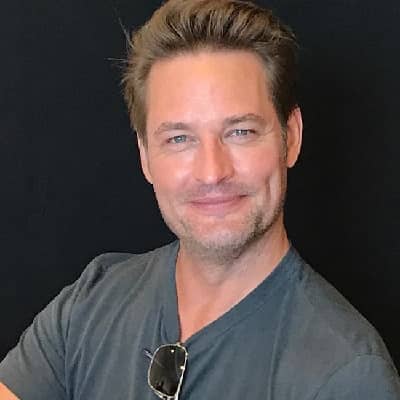 "I was booking jobs once, maybe twice a year." - On how unlucky he was when he first moved to L.A. to become an actor.

Fortunately and unfortunately, people don't see me as a character actor. They see me as a leading man or nothing, which makes it really hard to get work.

Being Southern and being the guy I've been all my life, I've lived more on the lighter side of life. I have a dark side, but that's not where I come from. A lot of artists like to come from that.

Josh Holloway is happily married to Yessica Kumala. The couple met for the first time in a bar in Los Angeles where Yessica asked Josh for his number. Afterward, they exchange their numbers and attracted to each other in a short period of time.

The pair dated for about five years before their marriage. After completing the shooting of the Lost pilot in Oahu, Hawaii, Holloway proposed to his long-time girlfriend, Yessica Kumala. Soon after, the lovebird tied the knot on October 1, 2004.

Besides, the couple has never been part of any negative rumors and headlines of the media. They always appeared as a strong couple and as of now they have been together for around 22 years.

Who is Josh Holloway?

Josh Holloway is an American well-renowned actor, model, and producer. He rose to fame through his role as James “Sawyer” Ford on the television show, Lost and as Will Nowman on the science fiction drama Colony.

The actor’s full name is Josh Lee Holloway. Josh was born on July 20, 1969, in San Jose, California, U.S. He is the second child of his parents among four children. When he was two, his family moved to the Blue Ridge Mountains of Georgia where he spent his remaining childhood.

Josh hasn’t yet disclosed his parent’s identity in the media. However, his mother is a nurse by profession, and his father a surveyor. He has an older brother and two younger brothers named Brad, Sam, and Ben.

Talking about his nationality, he holds American citizenship and belongs to Dutch and Scottish ancestry.

Josh completed his high school at Cherokee High School in Canton, Georgia in the year 1987. After then, he enrolled at the University of Georgia but dropped out after one quarter due to financial constraints.

Josh started off his career as a runway and print model. During his modeling career, he collaborated with notable brands such as Dolce & Gabbana, Donna Karan, Calvin Klein, and more. Prior to that, he worked on a farm where he had to pick dead chickens from a farm. In 1993, he starred in Aerosmith’s music video called “Cryin” alongside Alicia Silverstone.

Josh made his acting debut in the year 1999 through the series, Angel in an episode of “City Of” where he starred as a good-looking guy. Afterward, he appeared as Ben Wiley in an episode of “Medieval Crimes” in action crime television series, Walker, Texas Ranger. That year, he also landed the role on a big screen in the film Cold Heart. In 2002, he features in the three films titled Moving August, Mi Amigo, and My Daughter’s Tears. Similarly, he proceeded with television series such as Sabretooth (2002), CSI: Crime Scene Investigation (2003), The Lyon’s Den (2003), NCIS (2004), and more.

In 2004, he was cast in the main role of James “Sawyer” Ford in the television series, Lost from where he got his big break in his career. He portrayed the character until 2010. He also appeared in the 2007 science fiction video game, Command & Conquer 3: Tiberium Wars. Josh is also a producer of the television series, Colony and Yellowstone.

On October 13, 2005, Holloway and his wife were robbed at gunpoint in their Hawaii home, 12 miles east of Honolulu. The 23 years old Ruben Royce took cash, credit cards, and their car then drove off in Holloway’s Mercedes-Benz.

Later, a judge in a Honolulu court sentenced him to between 13 and 30 years in prison for a three-week crime spree.

Further, it is reported that Josh was offered to portray Gambit in X-Men Origins: Wolverine but he refused as he considered the character related to common with his Lost personage.

As of 2021, Josh has an estimated net worth of $25 million throughout his profession as an actor, model, and producer. In addition, he earned through several endorsements and has seen in commercials such as Old Navy clothing stores, Davidoff perfume, Magnum Ice-Cream, and more.

Josh named to be the second-highest-paid celebrity on the series called Lost. However, his salary, yearly income, and other assets are still under review.

The actor has muscular body physics. He has an impressive height of 6 feet and 2 inches and weighs about 91 kg. Likely, he has blonde hair with green pair of eyes color. His chest, biceps, and waist sizes are 43, 16, and 35 inches.