Joshua Hughes is a professional soccer player who plays as a midfielder for his team. 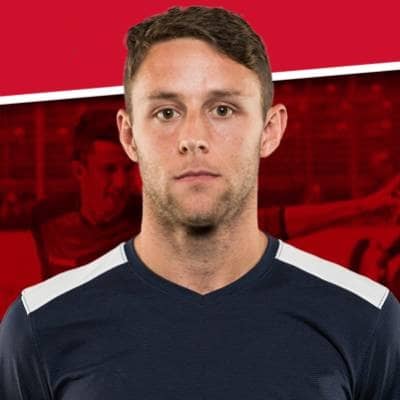 At present, the star soccer player, Josh Hughes is single and he is not dating anyone. Likewise, it is very hard to find his relationship status on the internet.

It seems that Josh has maintained his relationship details low-key.

Who is Josh Hughes?

Joshua Hughes is a well-recognized American professional soccer player. Hughes is popularly known by the name, Josh Hughes. He plays as a midfielder for his team.

Josh Hughes was born on 3 November 1991. At present, his age is 29 years old. Likewise, his birthplace is Charleston, South Carolina, USA.

Josh has not disclosed his father’s, mother’s, and family details till now.

Talking about his nationality, Hughes belongs to American identity whereas his ethnicity is Caucasian.

Regarding educational details, Hughes studied at Berry College in Mount Berry, Rome, Georgia. During his college days, he played football and made 69 appearances for the Vikings, and scored 14 goals along with 6 assists.

Moreover, he also emerged in the Premier Development League for Forest City London.

Though Josh had already played for his college team, he was highlighted after a signing contract with NASL side Atlanta Silverbacks. He appeared professionally for the very first time on 4 July 2015. In his debut, his team, Atlanta Silverbacks faced a 2-1 defeat to the Tampa Bay Rowdies.

Later Josh was connected to USL club, Harrisburg City Islanders and he was the frequent starter for the 2016 season on 23 March 2016. USL is the men’s soccer league in the USA and Canada.

Additionally, he spent time with MASL side Baltimore Blast in 2017. Also, he joined USL side Nashville SC for their opening season. Josh was mostly a bench player while playing for Nashville in 2019. He was seen playing during two U.S. Open Cup matches against under-division opponents Inter Nashville FC and Mississippi Brilla.

Afterward, he again joined the Blast ahead of the 2018-19 Major Arena Soccer League season. He agreed with USL league One side Richmond Kickers on 2 January 2019.

The professional Footballer, Josh Hughes earns handsome money from his profession. He has made some remarkable and beneficial contracts against successful clubs.

It is reported that Josh Hughes has a net worth of nearly $500 thousand at present.

However, he has not revealed his exact salary, earnings, income, and assets details till now.

The named sportsman has never been part of any rumors or controversies till now. It seems that Josh prefers enjoying his personal life and does not want to become part of any controversies.

Also, he has maintained a balance between his personal and professional life blissfully.

The athlete has a muscular body structure. Hughes stands at a tall height of 5 feet 10 inches. Likewise, he has a bodyweight of 78 kg.

Furthermore, Josh has blonde hair color whereas his eye color is brown.

Nevertheless, he has not stated his exact body measurement till now.

It seems that the well-named athlete prefers to enjoy personal life and does not want to become part of social media.