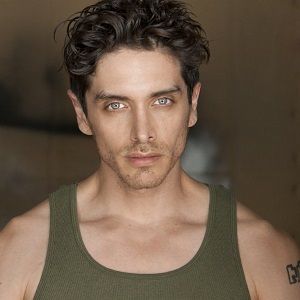 I think being a dragon would be pretty awesome... you get to fly.

Josh Keaton is a married man. He is married to his girlfriend, Elizabeth Melendez. The couple was dating and married on May 30, 2009.

They have been married for almost 10 years. They also have two children, however, their names are not yet revealed.

Who is Josh Keaton?

Josh Keaton is one of the popular American actor, voice actor, and singer is known by his stage name Josh Keaton. The actor is popular for portraying the role of  Takashi ‘Shiro’ Shirogane in Voltron: Legendary Defender.

Likewise, he also gained popularity after appearing as Spider-Man in The Spectacular Spider-Man, likely, Electro in Marvel’s Spider-Man, and Jack Darby in Transformers: Prime and the adolescent Hercules in the film Hercules.

Josh Keaton was born on February 8, 1979, in Hacienda Heights, California, the U.S.  His father is from Brooklyn, New York, and his mother is from Lima, Peru.

Likely, he has three sisters: Danielle, Alitzah (Ali Navarro), and Sabrina in his family. He is fluent in Spanish as he learned it when he was a child, then later English.

When he was a child, he learned to speak some Quechua from his maternal grandparents. His father is Jewish and his mother is Catholic.

He attended Glen A. Wilson High School and graduated from the same school.

Josh Keaton has developed his career into television, video game, and film work field. The actor has flaunted his talent in live acting and voice, work for animations.

As an infant, he has been featured in an OshKosh B’gosh commercial. Moreover, he was in the 1990s boy band No Authority. After working there, he got the chance to sign for MJJ Music and later also in RCA Records as a solo artist.

He has also provided the voice for Jules Brown in Back to the Future: The Animated Series during 1991/1992. Likewise also for Major Ocelot during Metal Gear Solid 3: Snake Eater and Metal Gear Solid: Portable Ops.

He has also given his voice for the Spider-Man in The Spectacular Spider-Man animated series on The CW from the year 2008 to 2009. Josh was originally supposed to voice Spider-Man in the 2002 Spider-Man video game but his voice work was scrapped and reworked as Harry Osborn/Green Goblin when Tobey Maguire came on to voice the character.

In 2011, Keaton is the current voice for Spyro the Dragon in the Skylanders reboot of the franchise, Jack Darby and Tailgate on Transformers: Prime, and Hal Jordan / Green Lantern in Green Lantern: The Animated Series.

It was in the year 2016, WonderCon said that Keaton will play Shiro, which was one of the main characters of the new Voltron animated series Voltron: Legendary Defender.

He has his name on various of the nominations as he has remarkable performance in some of his movies. He receives BTVA People’s Choice Voice Acting Award in the year 2016. Likely, he was awarded Best Vocal Ensemble in a New Television Series for Voltron: Legendary Defender (2016).

Likewise, in Young Artist Awards, he has received various awards respectively from the year 1992 to 1998. He received the Best Young Adult Performer in a Teenage Role from the movie, The Even Stevens Movie (2003).

He must have good earning as he has appeared in various of the good movies. Talking about his net worth, it is estimated to be $1 million.

He has maintained a good relationship with all other people in his personal and professional life. And so he hasn’t been into any kind of rumors and controversies.

Josh Keaton stands with a height of 5 feet and 9 inches. Likewise, his weight is unknown. He has hazel colored eyes and light brown colored hair.

This actor is active on different media platforms. He uses Instagram and has more than 148K followers. And he has over 81K followers on his Twitter account. His Facebook page has over 4.2K likes.