Josh Radnor is an American actor, director, producer, and screenwriter. He is currently single. 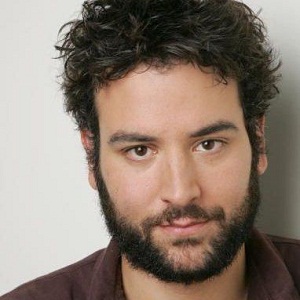 The purpose of fiction is to combat loneliness.

While baseball and parties can help, the only thing that heals a broken heart is time.

Sadness be gone, let's be people who deserve to be loved, who are worthy, cause we are worthy.

What is the relationship of Josh Radnor?

In 2008, Josh Radnor started dating Lindsay Price who is a television actress. But the relationship was very short lived because they broke up soon after a year in 2009.

He is currently single.

Who is Josh Radnor?

Josh Radnor is an American actor, director, producer, and screenwriter. He became famous after he began starring in the role of Ted Mosby on the television series, How I Met Your Mother.

Josh made his writing and directorial debut with the 2010 comedy-drama film ‘Happythankyoumoreplease’. He won the Sundance Film Festival Audience Award and was nominated for the Grand Jury Prize for this movie.

In 2012, he wrote, directed, and starred in Liberal Arts, which is his second film.

Josh Radnor was born on July 29, 1974, in Columbus, Ohio, U.S.A. His ethnicity is Irish-Jewish and his nationality is American.

Josh received his primary education from a Jewish school. He then went to Columbus Torah Academy and then he joined Bexley High School. He graduated in the year 1992.

After completing his high school graduation, he joined Kenyon College and he also graduated from there in 1996 with a Bachelor of Arts degree in Drama. He wanted to study further hence for his higher education, he joined New York University and majored in acting.

Talking about his career journey and growth, the magnificent actor Josh Radnor started his acting career in the year 2000 by appearing in the small role of Doug in the television series ‘Welcome to New York’.

Even his small appearance in the TV series made a huge impact on the entertainment world.  After that, he started getting other television roles.

It was in the year 2001 when the talented actor, Josh Radnor made his movie debut by playing the small role of tour guide in the movie titled ‘Not Another Teen Movie’. In 2010, he rose to fame and gained huge appreciation when he portrayed the character of Sam Wexler in the movie called ‘Happythankyoumoreplease’.

Josh also worked as a writer and director for the movie. His second directorial effort, Liberal Arts, starring himself and Elizabeth Olsen, premiered at the Sundance Film Festival on January 22, 2012.

Radnor appeared in the Broadway production of Disgraced, which opened on October 23, 2014, at the Lyceum Theatre. In October 2016, Radnor also confirmed he is in a band, Radnor, and Lee, with Australian musician Ben Lee. While he was attending Kenyon College, he was presented with the ‘Paul Newman Award’ by the theater department of the school.

He has accumulated a net worth of‎ $30 million as of 2022. But there is no information regarding his salary.

According to rumors, There was a rumor circulating on the internet that actor Josh Radnor is dating Minka Kelly. It was at the end of the year 2016. Surprisingly, the duo was spotted together holding hands.


Josh has a height of 5 feet 11.5 inches and weighs 75 kg. His hair color is black and his eye color is brown. His shoe size is unknown.