Updated On January 29, 2023 | Published By: Robert Taylor
Share this
In Relation 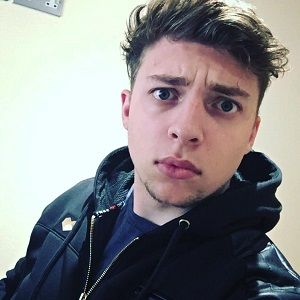 What is the relationship of Josh Temple?

Josh Temple is in a relationship. He has been dating his long-time girlfriend who has an Instagram account under the name @moatcha.

Josh has posted a photo on Instagram of them. Moreover, the couple was spotted several times together.

Usually, he doesn’t speak about his personal life in the media and in public. Furthermore, there are not any affairs, girlfriends, or relationships of him.

Who is Josh Temple?

Josh Temple is a famous British YouTuber. He is best known for his social media name ‘Slogoman‘.

Furthermore, Josh has uploaded a video of the game Grand Theft Auto V from which he got recognition. He has been uploading gameplay videos, especially of GTA 5.

He was born on 16 May 1997, in England. Talking about his early life, he grew up in Farnham, Surrey with his father and mother, Brigitte.

Furthermore, he has one sister, Amelia Temple, and belongs to the English ethnicity.

He spent his childhood alongside his sister. Concerning his education, Josh attended Weydon Secondary School. Prior to Youtuber, he was a rugby player.

Josh Temple began his career by creating his Slogo channel on August 4, 2013. Since that, he has been posting many videos on his channel to date. He has more than 7.48 million subscribers.

On Youtube, his first video was GTA 5. Mainly, Josh has been uploading GTA 5 races with his friends Jelly and Kwebbelkop. Furthermore, he gained himself the title “King of Sticky Bombs” for his skills in using sticky bombs causing his friend Jelly to rage-quit.

In addition, Josh has also collaborated with The Robust which was created by his friend Kwebbelkop and Jelly. Apart from that, he also plays various types of minigames in GTA 5 with his mates.

His most famous video is GTA 5 mini-game video which has also a huge view. His most viewed video is WHIRLPOOL DEATH DERBY! which has more than 17 million viewers.

How much does Josh Temple earn?

With the help of his trending gaming youtube videos, Josh has been earning a massive amount of money. As of 2022, he has an estimated net worth of $1 million.

As a famous YouTuber, Josh has a massive fan following on his social media accounts.

Currently, there are no rumors regarding his professional and personal life. It seems he is focusing more on his profession rather than on other stuff.

What are the body facts of Josh Temple?