Joshdub is a social media sensation well known for his Youtube channel and Tiktok videos.

Joshdub is in a loving relationship with his girlfriend, Kristy Cherise. Kristy is also a gamer, Twitch streamer, and content creator.

Josh and Kristy are very in love with each other and even share adorable couple photos on their social media accounts.

Similarly, they are very loved and supported by their fans. The couple feature and appear on each other’s channel a lot. But, their actual dating period is not given yet. 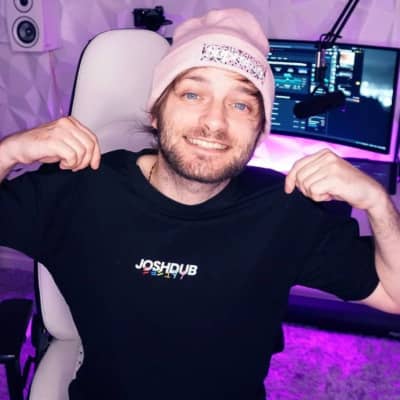 Joshdub is an Australian social media sensation who is well known for his Youtube channel and Tiktok videos. He mostly posts gaming content including VR Chat, Hellsplit: Arena, Beat Saber, Pavlov VR, etc. The videos he makes are hilarious and entertaining as well.

Joshdub, actual name Josh Dugan, was born on 11 October 1990. He was raised in Adelaide, South Australia, Australia. So, he holds an Australian nationality and he belongs to white ethnicity. Further, he will be 31 years old as of 2021 and he falls under the zodiac sign of Libra.

As for his parents, the information and names of his parents are not available at the given moment. However, he has a younger sister named Alana. Other details about his relatives, cousins, etc are not given as of yet.

Regarding his educational background, the name of the high school he attended and his academic qualifications are not given as of now. But, taking his age under consideration, he must have graduated from university by now unless he decided to quit his studies and concentrate on his Youtube career.

Joshdub is popular for his videos on his Youtube Channel “JoshDub”. He posts videos related to gaming like Blade and Sorcery and Minecraft VR and frequently includes various skits with his other collaborators. He is described as the pioneer of VR entertainment on Youtube by his management and Click Management.

Josh began his Youtube journey on 31 July 2013, but he uploaded his first video in the year 2017 under the caption “BUTTHOLE ADVENTURES FEAT. MULLEN (CLIMBEY) [HTC VIVE]”. He shared this video on 6 May 2017 and has gained over 1.7 million views now. Before his Social media fame and Youtube career, Josh used to work in a factory in South Australia. Up until now, he has garnered more than 1,179,341,506 total views on his Youtube channel.

Josh posted a preview of the virtual reality game Accounting in the year 2016. He has also visited the AVCon anime and video game conventions in 2019. Furthermore, he often associates with his fellow Youtubers including Mully, Your Narrator, EddieVR, JuicyFruitSnacks, and ReeKid. Josh has named this group ‘The Boys’. Additionally, he has also collaborated with other YouTubers such as Crayator and Xtended Reality, and more recently, SwaggerSouls as well.

In addition, Josh is also an active participant of the Youtube Channel “The Boys”. Josh is also famous in Tiktok for his gaming content and has earned more than 8.4 million fans till now. He is well known for his comedy gaming skits. Also, he posts many videos on his Twitch account.

Joshdub is a famous social media personality. But, he has still not achieved any awards or nominations yet. However, he is a very enthusiastic and creative YouTube content creator. He is sure to receive many awards for his gaming skills and creative content in the upcoming years.

Joshdub is the best-known gamer Youtuber. He earns a pretty decent amount of money from his videos. The estimated net worth of Josh is approximately $1.6 million as of 2022. His main primary source of earning is his Youtube videos as well as Tiktok videos.

Joshdub has never been included in any unnecessary rumors and controversies till now. He has successfully stayed away from any scandalous news and kept his personal life away from the eyes of the media.

The details on his body measurement such as his height, weight, chest, waist, hips, shoe, biceps, etc are not known to the public at the very moment. However, judging from his photos, he seems to have an average height and weight. Likewise, he has a pair of crystal blue eyes and short dark brown hair. He prefers to wear a beanie most of the time and also has a beard.