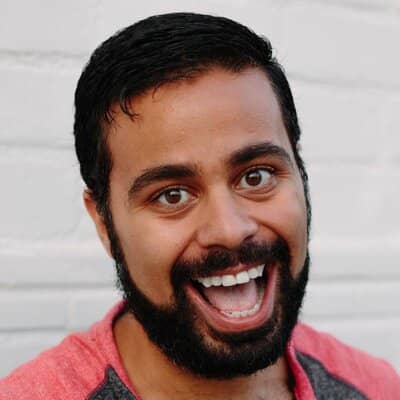 Josh has a short-live romance with Roxanne from Love at First Kiss. Apart from this, he had 1 relationship in the past but there is no information about his previous partner.

Who is Joshua Basili?

Josh Basili is an American actor, writer, producer, and comedian. He became a hot topic after starring in the reality show, “Love at First Kiss”.

American-born autistic actor, writer, prouder, and comedian, Joshua Basili was born on 5th September 1987. He was born and raised in Seattle, Washington, USA. He is of Egyptian and Italian descent but looks Hispanic/East Indian.

Josh graduated from the University of Washington. He currently resides in Los Angeles, California. He is also a supporter of the LA Lakers and also a big fan of Kobe Bryant.

Josh is an autistic person. He revealed to Vice that he was pretty negative growing up.

Josh is the creator, writer, executive producer, actor, and comedian.

He started his acting career in 2014. He starred in the TV Series, “Justice with Judge Mablean” as Plaintiff. This was just the start of a long and successful journey.

He has been in TV and Films such as I Hate My Neighbor, Justice with Judge Mablean, Interwove, Timeout Series, Finest Women in Real Estate, and You Can’t Lick Your Elbow a National Geographic Series. His most noticeable work came in 2018 through a TV Series, “Brownies” as J.

Josh is also a comedian and has also performed on the World Famous Comedy Store in West Hollywood, CA. Moreover, he has written his own autobiography called “Life Liberty and the Pursuit of Happiness”.

He has also written and is producing, directing, and acting in his own film, “The Overlooked” which is in pre-production.

Josh has had one nomination in his professional career. In 2019, he was nominated for the “Lift-Off Season Award” for the category “Best Short Live Action Narrative” for Brownies (2018).

Sadly, he hasn’t won any awards, but we hope he wins many awards in the future for his hard work.

The American actor, comedian, producer, and writer, has been working in the entertainment industry for almost a decade. According to various information, his estimated net worth is around $1 million to $5 million.

Josh is 5 feet 8inches tall and weighs around 73kg. Josh has black hair and brown eyes.

Josh doesn’t like to stand out in public. He is autistic. Hence, Josh is not active on social media. He is available on Facebook. His account is Josh Basili and has around 1k followers.