Joshua Sasse is a British actor and he is best known for his role as Galavant in ABC’s ‘Galavant’. He is married to his girlfriend, Louisa Ainsworth. 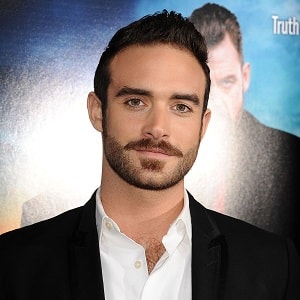 “I don't think of it so much as the shows I did or the film sets. I mean, sometimes you'll get a nice location, but it's more, 'Who am I meeting on a day-to-day basis?' Often the rehearsals are a lot more fun than the show itself.”

Joshua Sasse is a married man. He is married to his girlfriend, Louisa Ainsworth. The couple tied the knot on 21st September 2018, in Byron Bay.

Previously, he was married to Francesca Cini. They have a son named Sebastian (b. in 2013). Then he was in a relationship with Australian singer Kylie Minogue. They were engaged on 20 February 2016 but they got separated in February 2017.

Who is Joshua Sasse?

Joshua Sasse is a British actor and he is best known for his role as Galavant in ABC’s ‘Galavant’. Other projects in which he was featured in are Mamma Mia!, The Big I Am, etc.

He was born on 9 December 1987 in Westminster, London, England. His birth name is Joshua Seymour Sasse. He is the son of poet Dominic Sasse and Mary Rosalind(Macauley).

He has a mixed ancestry(Welsh, Irish, Scottish and Jewish) and he was raised in the Catholic tradition.

His father had an untimely demise during his flight to Kathmandu, Nepal. At that time, Sasse was only 5 years old. Then his mother remarried subsequently.

He attended Shrewsbury School after her mother’s remarriage. He found his love for acting during his school life.

Joshua Sasse debuted with the film ‘The Big I Am’ where he played as the role of Rixie in 2010. He portrayed the role of Sky in ‘Mamma Mia!’ at the Prince of Wales Theater in mid-2010.

He appeared in the film ‘Frankenstein’s Army’ in March 2012 and later in April 2013, he played in the TV series, ‘Rogue’. His recurring role was continued for the two series and 13 episodes.

He was portrayed in Dan Fogelman’s fairy tale,’Galavant’ in December 2013, and as a recurring role as DJ Jazzy Jeff on Fogelman’s comedy, ‘The Neighbors’.

He has been nominated for Outstanding Actor in a  Comedy TV Series for the movie ‘No Tomorrow’ in 2017.

Joshua Sasse: Net Worth and Salary

There is no relevant information about his net worth and salary. It is under review.

Joshua and Kylie announced their breakup after one year of their engagement. There were rumors about their breakup which also included cheating allegations about Joshua.

He had left her with heartbroken. Another news came mentioning that he has been dumped by his new fiancée, Harriet Colling with whom he was going to marry.

Joshua Sasse is 6 ft. tall and he weighs 76 kg. He has light brown hair and his eyes are green. His chest size, waist size, and biceps are 40, 32, and 15 inches respectively.

To know more about Hugh Dancy, Timothy Dalton, and Rory Kinnear, please click on the link.