Josiah Cerio- This child actor is not just an Actor, but also a producer, model, musician, and dancer! 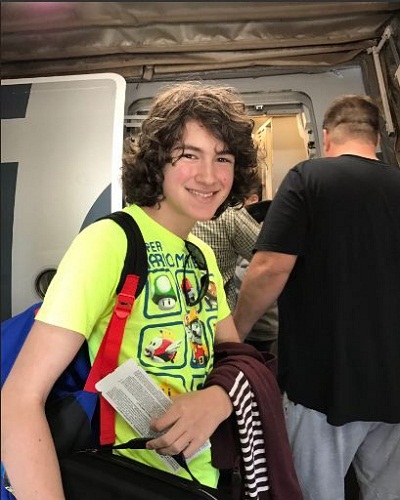 Building a path from early childhood

Josiah Cerio is popularly known for his acting skills from a young age. He was born on August 20, 2003, which makes him 15 years at present.

He has been acting and modeling since he was four years old. His interest in music also builds from his early childhood.

This Texas-born actor was born on Wednesday and his birth sign is Leo. He is popular for his appearance in Paper Towns, Skookum: The Hunt for Bigfoot and It Was a Good Day.

But from his success, we can expect his parents to be supportive. Some sources say He had a great interest in martial arts. He also achieved a black belt in Taekwondo.

This young talent from Texas is not only an actor, he is also a producer, musician, and dancer. As already mentioned above, when he was four years old, he began his journey to acting and modeling. His interest in music also grew from his early childhood.

He also likes playing the piano and ukulele. As a producer, Josiah has been executive producer for 2016’s Horror based movie titled Skookum: The Hunt for Bigfoot. Josiah is also seen on stage in productions of Sweeney Todd, Carousel, and The Sound of Music.

Josiah Cerio’s acting was visualized in 2010’s movie named Changing (Short, Drama, Family ) which was 25 minutes long. The following year, he made his appearance in It Was a Good Day (Short/Drama).

Josiah made his comeback in 2015’s movie named Old Bill’s Space Rock (Comedy). During the same year, he landed his role in The Mysteries of Science (Comedy), followed by his role in Paper Towns. His role as Young Quentin in the Comedy, Drama, and Mystery-based movie is one of his famous roles.

Josiah’s other successful role in the movie Skookum: The Hunt for Bigfoot (Horror) was released in 2016. His role as Young Jake Nelson is another famous role by far.

He portrayed Young Carl Jr. in The Misunderstanding of Carl Jr (Short, Drama) released in 2017. In 2018, Josiah appeared in This Is Blackmail (Short) and This is my gift to you (Short). Furthermore, he also appeared in A Heck of a Ride (Comedy) and The Middle (Comedy).

Also read Building his professional life pretty well, but why has not he revealed any details about his personal life?? Explore this child actor- Kendall McIntyre’s filmography!

This 19-year-old Josiah is young to be in a relationship. He is yet to find someone special. Josiah might be more focusing on developing his professional career as an actor, producer, musician, and dancer. We do not have information about his net worth and salary.

Josiah’s fans might have tried searching him on social media. He seems to be active on his Instagram account more. You can find him under the username @josiahcerio. We also have tried finding him on Twitter. He is available as @JosiahCerio on Twitter.