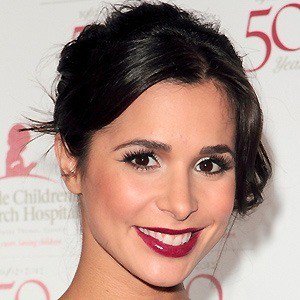 I was a very good student. Procrastinating gives me anxiety, and getting a B really ticked me off. Sure, I didn't always want to do my homework, but I actually really liked school. As nerdy as it sounds, I love learning.

I started acting when I was, like, five in monologue competitions at this private elementary school.

Honestly, I wasn't that girl in high school who people spread rumors about.

Josie Loren is a married woman. She has been married to her longtime boyfriend Matt Leinart since May 26, 2018. The couple tied their knot at the Grove Park Inn in Asheville, North Carolina, after a 22-month long engagement. The couple has not welcomed any child yet, however, she has a step-son named Cole Leinart(b. October 24, 2006).

The couple shares a strong relationship bold till date and they are sharing quality time with each other.

Who is Josie Loren?

Josie Loren is a talented American actress. She is best known for her role as Kaylie Curz in the ABC Family series ‘Make It or Break It’.  Also, she is widely recognized for her role as FBI Agent Michelle Vega in the TV series ‘The Mentalist’.

She was born on March 19, 1987, in Miami, Florida, USA. Her birth name is Josie Loren Lopez and she is currently 32 years old. Her mother’s name is Marcy Lopez and she is a middle school teacher at Zelda Glazer Middle School in Miami, Florida. She has an older sister named Jessica and two brothers named Asís and Javier. Her brother, Javier is a Harvard University graduate and a commercial litigator in Miami.

Josie holds American citizenship and her ethnicity is Cuban.

She studied at UCLA and later attended New World School of the Arts in which she studied stage acting. She is studying Mass Media Communication in college and getting a minor in Spanish.

She debuted her career from the role of Chloe in the series ‘Veronica Mars’ in 2006. In the same year, she appeared as Holly in ‘Hannah Montana’ and as Amanda’s Friend in ‘Medium’ in 2006.

She has an estimated net worth of around $1 million and she has earned that sum of money from her professional career. Also, she owns an apartment in Miami, Florida, USA.

It seems she does not like to harm any other person and wants to keep her lips tight. Hence, she has not been involved in any types of rumors and controversies in her career.