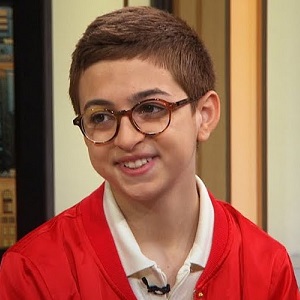 My pronouns are she, her, and hers. I identify as female, specifically as a transgender female. And my name is Josie Totah

You can do whatever you wanna do. If you're a girl - girl, you get on the football team, okay? If you identify as a boy, you put on some makeup, and you work that stage

I want to tell everyone that no matter what's keeping them from being their authentic self to hold on to the hope that there will be an end to that road. There will be a life where they can live their true self.

What is the relationship of Josie Totah?

Josie Totah is currently single, There is no rumor heard about her relationship and affair. She is focusing on her career and might be looking for a perfect match for her life.

Who is Josie Totah?

Josie Totah is an American actress who is famous for her starring role in the comedy series ‘Back in the Game’ in 2013 and for her recurring role on the Disney Channel series ‘Jessie’. She was initially playing male roles but she changed her first name to Josie and publicly came out as transgender in August 2018.

She was born in Sacramento, California, USA, on August 5, 2001. She is currently 20 years old. Her father’s name is Suheil Totah and her mother’s name is Christine Totah. She has got a brother and a sister. She holds American citizenship and her ethnicity is a mix of Palestinian and Lebanese.

There is no information available regarding Josie’s education history.

Josie Totah debuted acting after she was cast as the ‘Lil’ Dictator’ in the first production for Awesomeness TV in 2012. She appeared as Stuart Wooten in the Disney Channel Original Series Jessie’ in 2013 and has guest-starred on the TV shows New Girl, ‘2 Broke Girls, and ‘Liv and Maddie’.

Josie portrayed the main role in the ABC comedy ‘Baack in the Game’ in 2013 and was cast in 4 episodes of the sixth season ‘Of glee’ in 2015 as the youngest member ever of the ‘New Directions’.

Josie joined Adam Devine in the Disney feature film ‘Magic Camp’ in January 2017 and was cast as Michael Patel in the New NBC comedy ‘Champions’ in February 2017. The ‘Champions’ was p[icked to series in May 2017 and aired from March 8 but the comedy was canceled on May 25, 2018.

She was nominated for Young Artist Award for Best Performance in a TV Series –Recurring Young Actor 10 and Under for ‘Jessie’ in 2014.

She has an estimated net worth of $1.5 million as of 2022, and her salary and income are under review.

She has a height of  5ft. 2 inches and she weighs 55 kg. She has brown hair and dark brown eyes.