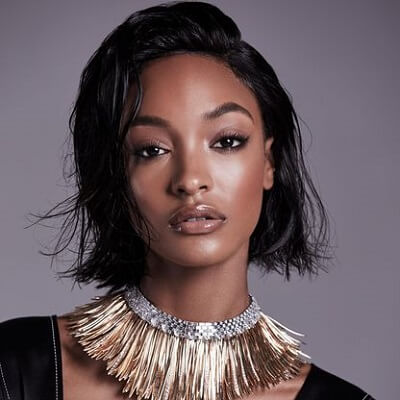 Jourdan Dunn is currently in a relationship. In addition, she is engaged to Dion Hamilton. Her fiance is a UK-based businessman and rapper.

She announced their relationship with a post on Instagram in which she called Hamilton her ‘life partner’ on January 1, 2020. She posted the picture with her son and Hamilton. Although his face was blurred out with a heart emoji, fans discovered who he was. The ring was an expensive one and worth around $30k.

Previously, she was in a relationship as a teenager with Jordan Cummings since 2005. The relationship lasted for around 5 years and she also has a child from her relationship, a son named Riley Dunn, who was born in 2009 when she was still a teenager. Cummings was arrested for cocaine possession and their relationship ended. However, even as a teenager, Dunn was brave and raised the baby as a single mother with the help of her mom.

After that, she dated the young model and boxer, Younes Bendjima in 2015. However, after less than a year, the couple decided to break up in October 2016.

Who is Jourdan Dunn?

Jourdan Dunn is an English award-winning supermodel and actress. Dunn has earned a spot on Forbes’ top-earning models list twice and is the face of Maybelline New York.

Jourdan Dunn was born on August 3, 1990, in London, England, UK. As of 2020, her age is 29. She was born to parents, Rodney Alveranga(father) and Dee Dunn(mother). Her parents separated when she was young and she lived with her mother near Greenford. She also has two brothers, Kain Dunn, and Antione Dunn.

Dunn has revealed that while growing up, she was very self-conscious. Everyone who knew her always said she would be a model. She was scouted at the age of 15 by an agent from Storm Management.

Her ethnicity is Jamaican, Grenadian, and Syrian.

Talking about her education, she went to Elthorne Park High School in Hanwell.

Jourdan Dunn has an estimated net worth of around $13 million. As of 2020, she is one of the highest-earning models in the world. She has an annual income of more than $3 million. She was the first black model to earn a spot in the Forbes top-earning models’ list.

Jourdan Dunn was discovered at the age of 16 in Hammersmith Primark and signed to Storm Model Management. In 2007, she made her runway debut in the New York shows for Marc Jacobs, Polo Ralph Lauren, etc and quickly rose to fame within the industry.

In February 2008, she became the first black model to walk a Prada runway in more than a decade. Moreover, she has featured in campaigns for Burberry, Calvin Klein, Balmain, Pepe Jeans, Yves Saint Laurent, Tommy Hilfiger, Topshop, among others. Moreover, she made appearances in the famous Victoria’s Secret Fashion Show in 2012, 2013 and 2014.

Dunn is now one of the most famous and loved supermodels in the world. She continues to be an icon and an inspiration for many young models. In 2018 and 2019, she walked for Burberry, Balmain, and Off-White. Furthermore, she made appearances in campaigns for Solid & Striped, Thierry Mugler, and Brandon Maxwell.

The British supermodel is represented by Women Management in New York, Paris, and Milan, Traffic Models in Barcelona, The Squad in London, Modelwerk in Hamburg, and Elite in Copenhagen.

In 2009, she featured in the cover of Teen Vogue alongside Chanel Iman. This was controversial due to the fact that Dunn was pregnant at the time. Although the cover did not show her baby bump, the cover was called controversial as Dunn was just a teenager at the time. While some people supported the magazine’s decision, some people criticized it as they thought the magazine’s readers, who are teenagers should be given more information about teen pregnancy and related issues.

Being a world-famous supermodel, Dunn is active and very popular on social media sites. She has around 113k followers on Facebook and around 276k followers on Twitter. Similarly, her Instagram account has around 2.5 million followers.

You may also like to read the Bio, Career, Net Worth, Social Media, Relationships, and more about Gigi Hadid, Bella Hadid, Kendall Jenner, and more.

Jennifer Lopez And Alex Rodriguez Getting Married AnyTime Soon? Here Is Everything About Their Relationship!