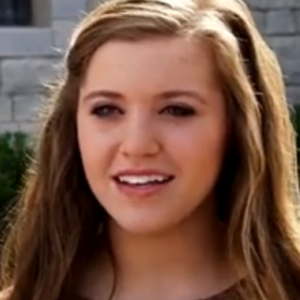 We have been dreaming of this day and are so happy to announce that our baby girl arrived August 21st at 2:12pm weighing 8lbs 5oz and is 19.5'' long!

She has her nights and days mixed up, but honestly, I love it! Getting to spend that quiet, quality time with her through the night has been SO special! We are grateful for all the love and prayers that have come our way during this pregnancy.

I am at a loss for words, so I’m just going to say... She is perfect and I love her more than I EVER thought imaginable!

Joy-Anna is married to Austin Forsyth on 26th May 2017. Together, Joy and Austin have two children, Gideon Forsyth born on 23rd February 2018 and daughter Evelyn Mae Forsyth born on Aug. 21 2020.

As of March of 2017, Joy-Anna Duggar announces the engagement with her friend Austin Forsyth.

In 2019, Joy was pregnant but she had a miscarriage in post 20 weeks of her pregnancy which she shared in July.

Who is Joy-Anna Duggar?

Joy-Anna Duggar is an American actress & Reality Television star, known for 17 kids and counting (2008), Today and 14 Chikdren and Pregnant Again (2004).

Joy-Anna Duggar was born on October 28, 1997, in the United States of America. Her nationality is American and ethnicity is North American.

Joy-Anna Duggar belongs to the Duggar clan. She first appeared on the reality show ’14 Children and Pregnant Again’.

Joy-Anna Duggar was homeschooled like her other siblings and is also the most watched members among the Duggars’.

Joy-Anna Duggar career started when she first appeared on the reality show ’14 Children and Pregnant Again’ which is now renamed as ’19 Kids and Counting’. Then in the year 2011, she did her first movie ‘Courageous’.

Joy’s About ’19 Kids and Counting’; ’19 kids and counting’ was an American reality television show, this show on TLC channel for several years. This show formerly was known as ’17 Kids and Counting’ which eventually became 19 kids and Counting until it was canceled in 2015. The show featured the Duggar family with Jim Bob and Michelle Duggar with their 19 children, where every member’s name starts with ‘J’.

This reality show is about the life and belief of Duggar family where purity, modesty, and faith in God are highly valued. This family has decided not to use birth controls as they believe that God determines the number of children they will have. The Duggar family appears in several TLV and Discovery health one-hour specials.

Joy-Anna in 19 kids and Counting, During season one Joy-Anna, was 11 and she went to New York NBC’s Today Show which she calls her best tour. In the ‘Big Family Reunion’ episode, she went on a trip with her family to Ohio. Joy-Anna appeared in a tomboyish look on the show as she spent most of her time with her brothers.

Joy-Anna hasn’t talked about her Net Worth and Salary to the media yet.

The Unmarried Joy-Anna’s pregnancy rumors and the Duggar family is reeling after a new sex scandal involving Joy-Anna, Jim Bob, and Michelle’s ninth child, according to a new report.

She has a height of  5 feet 5 inches and a bodyweight of 54 kg. Joy-Anna Body measurements are 34-23-35. Her hair color is brown and eye color is dark brown.

Change of wedding plans! Joy-Anna Duggar gets married to her fiance five months in advance: Know the reactions of the couple and family! Read on for more!