Posted by MarriedBiography Posted on August 26, 2020 | In Child , Married , Pregnant
Share this 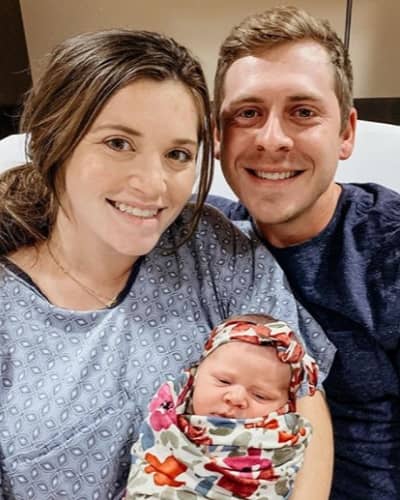 Joy-Anna Duggar has good news to share with her fans. On 21st August 2020, the couple welcomed their baby daughter. Duggar shared the news by uploading a picture of her, her husband Austin Forsyth, and their baby girl. She wrote,

“To say my heart is full is an understatement.
We have been dreaming of this day and are so happy to announce that our baby girl arrived August 21st at 2:12pm weighing 8lbs 5oz and is 19.5” long!“

To say my heart is full is an understatement. We have been dreaming of this day and are so happy to announce that our baby girl arrived August 21st at 2:12pm weighing 8lbs 5oz and is 19.5” long! She has the best personality, is easy going and loves to be held! ▫️ She has her nights and days mixed up, but honestly, I love it! Getting to spend that quiet, quality time with her through the night has been SO special!✨ • More updates to come soon…🥰 Link in bio for the first news story on our sweet girl!💕

“She has her nights and days mixed up, but honestly, I love it! Getting to spend that quiet, quality time with her through the night has been SO special!”

The newborn girl is their second child. She was born without complication and was very happy news after her previous miscarriage. In July 2019, she had a miscarriage in her 20th week. So, this pregnancy was very important to them. She shared the pregnancy news in March 2020. In one of her videos, she said that she was going to the hospital for the birth.

Duggar was sad that her family could not be present at the time of baby birth due to the ongoing coronavirus pandemic. Both mother and new baby girl are healthy and safe. Also, they have not revealed the name of their daughter yet.

Also read Chelsea Tyler And Her Husband Jon Foster Welcomed Their First Child Together; Shares The First Baby On The Social Media!

Joy-Anna Duggar and Austin Forsyth met each other when they were children at a homeschooling conference. They knew each other for almost 15 years before being a couple. His family moved to Arkansas and joined the same church with the Duggar family were part of. They did not date each other for years.

At the right time, they started dating. Forsyth revealed,

“You know, over the years, I have just been watching and I really admire her heart for the Lord and her character. She’s such a diligent worker. She gets all the younger siblings working. She’s a good delegator.”

In a YouTube video, Joy revealed that she was surprised when he proposed. She was happy to start a new life with him. They decided to take a new step and get engaged. They engaged in March 2017.

Their wedding was scheduled for 28th October but they walked down the aisle on 26th May 2017. They tied the knot in front of 1,000 guests at their church. Their honeymoon was in Switzerland starting from Geneva and traveled to Interlaken and Zurmatt. They also spent time in Israel. Since then, they are happily married.

On 30th August 2017, they revealed that they were expecting their first child. Their son Gideon Martyn was born on 23rd February 2018. Similarly, the family has become a family of four with the arrival of their new daughter.

Who is her husband Austin Forsyth?

Her husband Austin Forsyth is a construction worker. He is also known for appearing in the show Counting On. On 6th June 2009, he starred in the TV show World’s Strictest Parents. After that, in 2012, he was seen on an episode of the TLC show United Bates of America.

He was announced as a regular cast member of the TLC show Counting On. After that, they featured his wedding with Joy-Anna. Also, talking about his construction work, he started working at a young age. He used to buy and flip houses and continued to work selling and flipping houses. His EMT license expired on 31st Match 2020.