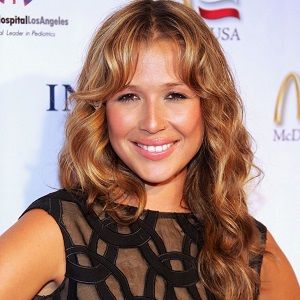 Besides him, Joy has also dated Derek Jeter in 2001. However, they couldn’t handle their relationship for too long and broke up just after a couple of months. Currently, Joy and Rodney have maintained a perfect relationship between them and living elegantly.

Who is Joy Enriquez?

Joy Enriquez is an American actress and singer. Joy Enriquez became famous after appearing on the television series 7th Heaven. Furthermore, she has also appeared in a couple of movies such as Chasing Papi and Lady and the Tramp II: Scamp’s Adventure.

Additionally, she has also given background vocal in several movies such as When You Beleive, Bad Girls, and few more.

Joy Enriquez was born on June 6, 1978, in Whittier, California, United States. From the beginning of her childhood, she had a keen interest in singing as she started from the very early age.

Joy began her career by participating in Star Search at the very young age of 11 and also won eleven performances there. In 2001, she got a solo deal with LaFace Records and released her debut album, Joy Enriquez. Soon after she launched her album, its first single Tell Me How You Feel became huge success internationally. Furthermore, she has landed other two albums later in 2006 and 2016 named, Atmosphere of Heaven and The Call respectively.

Apart from the musical career, Joy has also appeared in a couple of movies, Lady and the Tramp II: Scamp’s Adventure and Chasing Papi. Moreover, her television venture includes Star Search, 7th Heaven, House of Joy and few more. In addition, she was also a background singer to the single “When You Believe”, which was a duet by Whitney Houston and Mariah Carey.

Being a popular singer and actress, Joy earns a decent amount of money from her career. However, her salary and net worth are unknown.

As of now, she has not won any awards and achievements in her career.