Joy Taylor is a Host and Correspondent on Fox Sports. She has also hosted 'The Ticket Morning Show.' Joy is currently engaged. Previously, she was married to Richard Giannotti but divorced in a year. 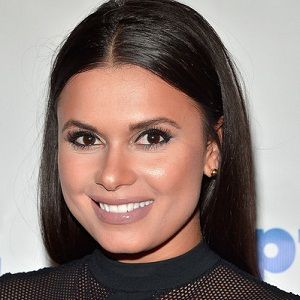 She and her husband met in a conference form than they were attracted to each other. However, in 2017, the couple divorced.

Who is Joy Taylor?

Joy Taylor is an American radio personality and television host for Fox Sports 1. She is best known for being the moderator for Fox Sports 1’s new studio show Skip and Shannon.

Joy Taylor was born in the year 1987 on January 17, in Pittsburgh, Pennsylvania, in the United States of America.

Her father is African-American and her mother is Caucasian. Her father’s and mother’s name is Anthony and Georgia Taylor. She has a brother named Jason Taylor, who is the former NFL defensive end.

Taylor belongs to the French-African ethnicity.

Joy Taylor attended Barry University and graduated in 2009 with a Bachelor of Arts Degree in Broadcast Communications.

Taylor was already working as the host of the radio show “The Noise” and serving as the manager for Barry University’s radio station “WBRY 1640 AM” while finishing her degree.

Taylor had begun her career as a radio show host while she was studying at university. She also served as the manager for Barry University’s radio station “WBRY 1640 AM”. Joy served in the media working with personalities including Joe Rose, DJ Laz, Sid Rosenberg, and Dan Sileo.

Prior to joining Fox Sports in March 2016, Taylor was the host of Fantasy Football and Thursday Night Live Today on CBSSports.com.

She previously worked three years at 790 AM The Ticket, where she began as the producer then eventually becoming the co-host for 790 AM The Ticket’s morning sports radio show “The Ticket Morning Show.”

On March 17, 2016, Joy Taylor made her first television appearance on Fox Sports 1 radio television talk show “The Herd with Colin Cowherd” as a guest news reporter.

On the day of August 15, 2016, it was announced by Fox Sports that Taylor would be the moderator for Fox Sports 1’s upcoming sports debate show “Skip and Shannon Undisputed” with commentators Skip Bayless and former NFL tight end and former CBS Sports analyst, Shannon Sharpe.

Joy is also an On-Air Host for FS1 and Fox Sports Radio as well as a blogger on the channel named JoyTaylorTalks.com.