Joy Villa is an American singer-songwriter, actress, and YouTuber. She is known for her outspoken support of U.S. President Donald Trump, and various conservative and right-wing political and social causes. 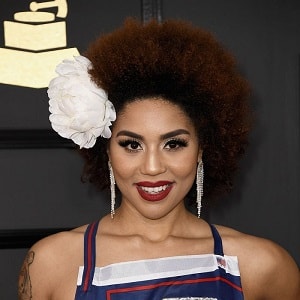 “The spooky thing is that two weeks before the Grammys, I wrote down my goals, and one of them was, 'To be on the top of the Billboard charts with a song I wrote and performed.' ... It's completely unheard of.”

Joy Villa married Danish writer and Photographer, Thorsten Overgaard in December 2016. They met for the very first time in Hollywood where Thorsten was photographing a gala.

The couple has an age gap of 21 years. The couple shares three children: twins Caroline and Olive, and a daughter, Robin.

But she and her husband separated in the year 2019.

Who is Joy Villa?

She is famous for her performance in ‘CSI: NY’, ‘The Valley Girls, and ‘Hobgoblins 2’.

She was born on April 25, 1986, in Orange, California, USA. Her birth name is Joy Angela Villa she is currently 34 years old. Her father’s name is Rev.

There is no information about her siblings. She holds American citizenship and her ethnicity is a mix of Italian, Argentinian, African-American, Choctaw Native American.

She joined the high school at Lompoc High School.

She worked with Youth Network TV on Comcast Television from the age of 14 to 16. She played an umbrella-wielding carney in the ‘Heroes’ Season 4 episode ‘Orientation’ and appeared on ‘CSI: NY’, ‘The Valley Girls’ and MTV ‘Next’. Her major role includes in ‘Hobgoblins 2’.

She is a strong supporter of Trump. She voted for Donald Trump in the 2016 Presidental elections of the United States although she was a supporter of Senator Bernie Sanders. Joy tweeted as she was against abortion and she was supportive of religious freedom.

She announced on Fox & Friends on October 26, 2017, that she was considering running for US Congress as a Republican on October 27, 2017. She considered representing either California, Florida, or New York. In May 2018, she joined the UK March for Life.

She sent a message where she expressed support for Robinson and then accused Theresa of failing democracy, stealing Briton’s bright right, and stifling free speech.

She has not been awarded and nominated for her work in her career.

She has an estimated net worth of around $500k and her main source of income is from her professional career.

She filed a police complaint against Trump’s former campaign manager Corey Lewandowski on November 28, 2017, for allegedly slapping her buttocks at a holiday party at the Trump Hotel in Washington, D.C.

Lewandoski slapped her again after she told him that she could report him for sexual harassment.

To know more about Erin Moran, Philip McKeon, and Vince Vaughn, please click on the link.