Celebrity makeup artist Joyce Bonelli is married and a mother of three! 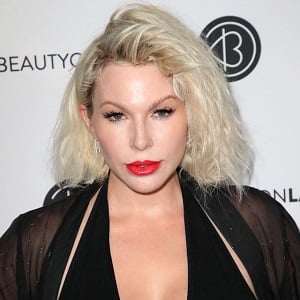 Joyce Bonelli is a married woman. She is married to Ben Taverniti.

She previously had a son named Zeplin and in 2016 gave birth to twin boys. The pair’s marriage is going strong as there is no news regarding any extramarital affairs at present.

Who is Joyce Bonelli?

Joyce Bonelli is an American makeup artist. Previously, she was the go-to makeup artist for the Kardashian and Jenner families.

Additionally, she has also worked with other celebrities including Demi Lovato, Lindsay Lohan, and Nicki Minaj among others.

Bonelli was born in Los Angeles on July 7, 1981. Her father was a painter and her younger brother is an engineer. Bonelli’s parents have divorced. She is of American nationality.

Furthermore, there are no details available about her ethnicity at present. Additionally, she took her first esthetician course when she was 16 years old and became interested in the world of makeup from an early age.

Talking about her education, Bonelli studied special effects and animatronics at the Make-up Designory school.

Joyce Bonelli initially studied various makeup techniques. Soon, she met Kim Kardashian at a photoshoot in 2005. She finally got her big break while working on Pamela Anderson‘s Playboy shoot in 2006.

In addition, since then, she has worked with several celebrities in Hollywood. Some of them include Lindsay Lohan, Holly Madison, Nicki Minaj, and Demi Lovato.

Furthermore, Bonelli garnered widespread after she became the Kardashians’ glamorous make-up artist. Presently, she is also a social media star with over 2.1 million followers on her Instagram account. Additionally, she was the inspiration behind Kim Kardashian’s platinum blonde hair.

Bonelli has not revealed her current salary. Additionally, there are no details about her net worth. However, several sites suggest that she reportedly makes over $1 million per year.

Bonelli became part of a controversy after she was accused of harassing her fiancé’s ex-wife and fat-shaming his son in October 2016. Additionally, her split from the Kardashian family also raised several eyebrows around the world.

According to a source, the split happened after Bonelli tried to exclude the Kardashians from a money-making deal. At present, there are no rumors concerning her and her career.

The Kardashian end their relationship with their longtime makeup artist and friend, Joyce Bonelli. And says it’s an amicable decision!