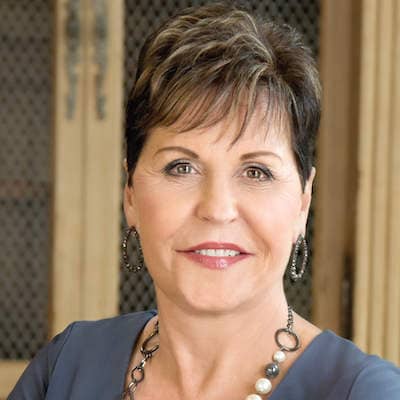 I had lots of hurt and lots of pain, lots of woundedness, bruises, broken heartedness in my life. I was abused sexually by my father, abused mentally, emotionally. My mom didn't know what to do about it, and she was being hurt in the process. So she just didn't deal with it. And I can guarantee you, just because you don't deal with something, that doesn't make it go away

You can look at a person's attitude and know what kind of thinking is prevalent in his life... It's better to be positive and wrong than negative and right!

Joyce Meyer’s relationship status at present is married. She exchanged vows with Dave Meyer on 7 Jan 1967.

Her husband and she are blessed with three children. Their son Gideon Babe Ruth Howard was born in 1997.

Previously, she married a part-time car salesman but his name is not disclosed. This marriage lasted for five years from 1961 till 1966 and they welcomed a child.

Joyce’s two daughters are Laura Marie Holtzmann, and Sandra Ellen McCollom, plus her sons are Daniel B. Meyer and David Meyer.

Who is Joyce Meyer?

Joyce Meyer is an American Bible teacher, author, and motivational speaker. She appeared on her own TV show named Enjoying Everyday Life as a host.

In the year 2005, this personality was titled as one of the most influential evangelical leaders of the US by Time magazine.

Her birthdate is 04 June 1943 and the place she was born is St. Louis, Missouri, the US as Pauline Joyce Hutchison. The name of her mother plus her father’s name is not disclosed.

Similarly, Joyce’s ancestry is Caucasian and as per her academics, she graduated from O’Fallon Technical High School.

Joyce Meyer has become a popular face and has millions of followers in the digital world. Her written publications are Beauty for Ashes: Receiving Emotional Healing in 1994, The Secret Power of Speaking God’s Word in 2004, I Dare You: Embrace Life With Passion in 2007, and more.

Joyce is serving as the president of Joyce Meyer Ministries which changes lives by providing various classes.

By the records of 2021, she has a net worth of around $8 million (estimated). Her annual salary and other earnings are under the rug.

She owns a private jet, a Gulfstream G-IV that she uses to travel, and has many homes.

In the past, when her father came from World War II, he started to abuse her sexually, mentally, plus emotionally.

She was only an infant at that time and when her mom started to protect her, she was also hurt by her dad. Also, Joyce Meyer Ministries was sued by Sheri Coleman’s family in 2009.

Christopher Coleman, the former chief of security of this company was arrested and sentenced for murdering his wife plus two kids.

The family of demised filed a case and said the deaths were happened due to Meyer’s negligence.

Joyce Meyer’s height of 5 ft 5 inches and her body weight is average. Also, she has brown eyes and has light brown hair.