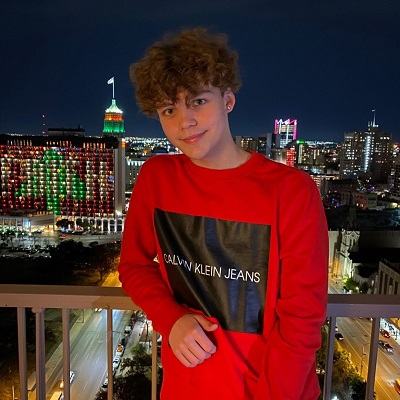 Currently, Jr Stuber’s relationship status is single. There is no information about his prior relationship.

The TikTok star is currently focused on his YouTube career.

His Instagram posts suggest that he loves making funny videos and getting perfectly clicked. Apart from that, he likes spending time with his friends.

Who is JR Stuber?

American JR Stuber is an Instagrammer and TikTok. Stuber is renowned for his Instagram post and lipsyncs videos on TikTok that went viral on the web.

JR Stuber was born on the 6th of February 2006 in San Antonio, TX. He is of North Germanic ancestry.

He has four siblings which include two brothers and two sisters.

That, he appreciated him to make such videos. Such funny videos won the hearts of the many fans and followers which making him an Instagram star. Apart from that, he also posts photos that showcase his fashion sense.

After Instagram, he started making lipsyncs on the TikTok. His very first lipsync video on the app earned the 16.6k likes. Following the video, he started posting other TikTok videos as well. However, those videos earned likes in the range of 3k likes only.

Despite that, he uploaded new videos on the app with his friends and siblings which has really paid of making 4.1 million views as of now.

He created his YouTube channel in 2015. However, the Instagrammer is uploading videos on the channel from 2019.

His first video, Am I Starting YouTube ?! was uploaded on the 21st of December 2019. Following the video, he has uploaded 4 more videos on the channel. Among them, his video, Turn Ons And Turn Offs earned 50k views which happen to the highest as of now.

Apart from that, he also earns through his Instagram posts has an engagement rate of 8.53%.

The Instagram star has not been through any sort of controversy that creates a buzz on the media till the date.

Stuber has a self-titled YouTube channel with 7.51k subscribers with 70k views.