JT Brown is an American professional ice hockey right-winger. He is married.

JT Brown is a married man since 2015. He is married to his longtime girlfriend Lexi LaFleur. The couple dated each other for several years before getting married. After years of their relationship, the couple got married on February 6, 2015.

The couple has been married for three years now and their relationship is still going very well. There is no other record of his past and present relationship. It seems like Lexi is the first love of his life. Brown is living a happily married life with his wife Lexi. 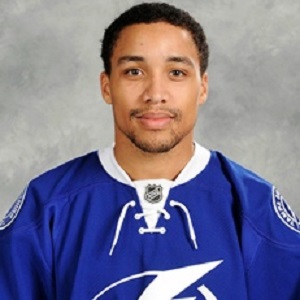 Who is JT Brown?

JT Brown was born as Joshua Thomas Brown on July 2, 1990, in Burnsville, Minnesota, USA. He is the son of famous American football player Ted Brown. There is no information about his mother and siblings.

He was raised in nearby Rosemount, Minnesota. His nationality is American and he is of North American ethnicity. He attended the University of Minnesota Duluth.

Brown began his career playing junior hockey in the United States Hockey League (USHL) with the Waterloo Black Hawks. After that, he attended the University of Minnesota Duluth and played for the University’s team. In 2011, he was named the Most Outstanding Player at the 2011 Frozen Four national championship with the Bulldogs ice hockey team.

Brown was criticized for his rude behavior with fans a few years back. He broke a fan’s mobile phone while the fan was trying to take a photo of him. Currently, there are no desperate rumors regarding his personal and professional life.

He has a height of 5 feet 10 inches with body weight 79 kg. He has a brown eye color and his hair color is dark brown.

Demi Lovato on the tragic incidence of her life – being raped during teen days to sexually assaulted while overdosed!