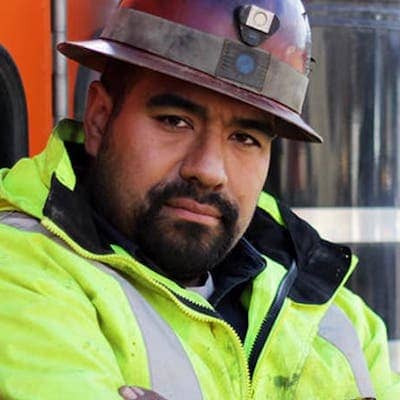 Juan Ibarra at present is in a married relationship. He walked the aisle with Andrea Ibarra but their wedding details are hidden.

From the marriage, this couple is blessed with two children. Their names are Addison Marie Ibarra and Juanito Ibarra.

Who is Juan Ibarra?

Juan Ibarra is an American TV personality and businessman. He is also a fabricator and mechanic.

He is most popular for his work in a discovery channel’s show named Gold Rush.

He was born on 02 April 1983 in Reno, Nevada, United States. The name of his father is and his mother’s names are cloaked.

His parents owned Ibarra Drain Services and are plumbers. Juan’s ancestry is Caucasian and has a sister.

To talk about his academics, he has studied at Hug High School.

Juan Ibarra used to be a plumber and construction worker. He started to earn fame after joining the cast of Discovery channel’s show named Gold Rush. He appeared in its season six and was in Hoffman’s team.

There he was in charge of maintaining heavy equipment like the excavators, dozers, and more. After leaving Hoffman, he started to work with other people like Tony Beets in S9 and Diesel Laptops as a head mechanic.

Juan left the show from its S11 and was with them for four seasons from S6 till S10.

At present, his net worth is estimated at around $6 million US. His salary from the screen career is not yet disclosed.

He owns Ibarra Industries which deals with big rigs and larger construction equipment. As per the reports, the cast of Gold Rush receives an amount between $10,000 to $25,000 per episode.

This Gold Rust star made news when the S11 of the show was premiered. His absence in the show made the viewers to question.

As per the reports, his comments on politics kicked him out from the show but it is unclear.

Regarding Juan Ibarra’s body features, his height and his body weight are not disclosed. He has dark brown eyes and his hair is also dark brown color.