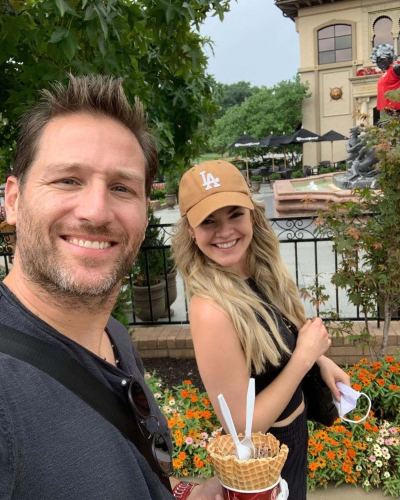 Juan Pablo Galavis has reunited with ex-Nikki Ferrell! The ex-couples reunited in Kansas City, Missouri, and look happier than ever. Juan posted a picture of the ice cream reunion on Instagram. In the shared picture, they were strolling through The Plaza shopping center as they smiled for the camera. Juan took the selfie while holding an ice cream cone with two spoons.

GREAT 7 years of CATCHING up @nikki_ferrell

For their meeting, Nikki wore a black two-piece outfit and an orange Los Angeles Dodgers cap. Likewise, Galavis donned a black T-shirt and sunglasses. Juan choose Nikki for the final rose after Clare Crawley left the show. They dated each other for almost seven months before calling it to quit. Nikki revealed that their split was an outcome of differences in lifestyles. She said,

“There was a while where I did feel like he was totally in love with me. Was it too late? Probably. I think at that point I had come to the conclusion that we were different people and we were never going to be on the same page.”

It has been seven years since they ended their relationship and seems like they are on better terms now. Their reunion is loved by fans and was happy to see their friendship growing.

Also read Conflict Between The Exes; Clare Crawley And Her Ex Juan Pablo Galavis Are Having Feud On Twitter!

Juan is an American-Venezuelan former professional soccer midfielder. He had retired in 2008, but in 2013, he had appeared in the ABC-TV reality show The Bachelor as their first Latino star after 17 editions. Read more bio…