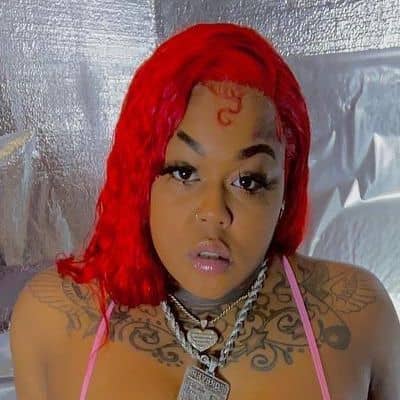 What is the relationship of Jucee Froot?

Jucee Froot is currently in a relationship and is the mother of one kid. Her boyfriend’s real name is unknown but he goes with the name Loyal 100 on social media.

They welcomed their first child, Zariah YaYa. Her daughter also has an Instagram account with over 19k followers.

Jucee posted an adorable picture of her kid with white & red frock in Feb 2021 which is loved b her fans.

Who is Jucee Froot?

Jucee Froot is an American rapper. She is noticed for her voice in the song Danger from Birds of Prey (2020).

She is associated with Hip hop music genre and Atlantic Records.

She was born as Terrica Shanice Alexander on 1 July 1994 in Memphis, Tennessee, USA. The name of her father and her mother’s name is hidden from the public.

Jucee’s ancestry is All-American and talking about her academics, she has not disclosed the details.

Jucee Froot is mostly known for singing a song titled Danger. This was made for a superhero movie Birds of Prey which was released in 2020.

She has also released several albums. Her first project was released in 2015 named Diamond in the Rough and her latest album was Black Sheep (2020).

Her other releases are Schizophrenic Flow, Concrete Rose, Rich Girl, Dripping Diamonds, and more. In 2019, she gave her fans an EP named Sextape.

She created a channel in March 2011. She has many videos uploaded and her subscribers are over 196 thousand.

How much is the net worth of Jucee Froot?

As of 2022, her net worth is around 100k dollars which are predicated. However, her salary and other earnings are unknown.

This musical personality is keeping herself away from rumors at present.

Regarding Jucee Froot’s body features, her height and her body weight are unknown. Moreover, her eyes are dark brown plus she has black hair.

But her body stats, dress, and shoe size are unknown. She dyes her hair in various colors like red, blue, green, and pink.

Jucee is active on social networking sites. Her Facebook and Twitter have more than 1.8m and 8k followers respectively.