Judd Apatow is a married man for a long time. He is married to actress Leslie Mann. The couple first met on the set of the 1996 comedy film, The Cable Guy.

After a year of their affair, the couple got married on 9 June 1997. They have two daughters named Maude Apatow and Iris Apatow.

The couple has been married for two decades now and their relationship is going very well.

Apatow and his family currently live in Pacific Palisades, a suburb of Los Angeles, California. 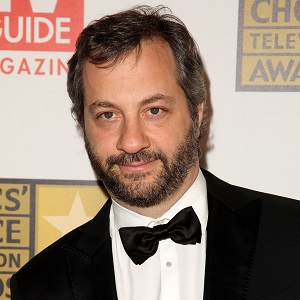 Eventually, the nerds and the geeks will have their day

I always felt as a kid that I was underappreciated, invisible or weird, but I've always secretly thought people would one day appreciate what is different about me. I'm always putting that message out there

I think that everything I do tends to root for the underdog.

Who is Judd Apatow?

Judd Apatow is an American film producer, writer, director, actor, and comedian. He is the founder of Apatow Productions.

Judd is famous for producing the television series Freaks and Geeks, Undeclared, Girls, Love, and Crashing.

Judd was born on 6 December 1967, in Syosset, New York, USA. His nationality is American and he is of Ashkenazi Jewish ethnicity.

He is the son of Tamara Shad and Maury Apatow. His father was a real estate developer. Apatow has an older brother named Robert, and a younger sister named Mia.

His parents divorced when he was 12 years old. As a child, Apatow lived mainly with his father. He often visited his mother on weekends.

He attended Syosset High School. After that, he studied the screenwriting program at the University of Southern California.

Judd began his career as a comedian while he was at Syosset High School. At the same time, he worked at Long Island East Side Comedy Club.

Apatow began performing stand-up comedy at age seventeen. While he was at USC, he organized and hosted a series of on-campus comedy night events.

He joined HBO’s The Larry Sanders Show in 1993 as a writer and consulting producer. After that, he co-wrote the feature film Heavyweights in 1995. Since then, he has produced and directed numerous movies and shows.

Judd produced the feature film comedy Anchorman: The Legend of Ron Burgundy in 2004. He made his feature directorial debut in 2005 with the hit The 40-Year-Old Virgin.

EW magazine ranked him #1 in The 50 Smartest People in Hollywood. He has won several awards including a Primetime Emmy Award and a Hollywood Comedy Award.

In addition, he won an AFI Award for Bridesmaids in 2011. His films have earned him nominations for Grammy Awards, PGA Awards, Golden Globe Awards, and Academy Awards.

Since early 2017, he is directing the series Crashing. In addition, he is also the writer and producer of the series.

Judd Apatow: Salary and Net Worth

It seems he is doing his best job without harming others and has been a straight person in his life. As a result, he has not been in any controversy yet.

He has salt-pepper hair and dark brown eyes. Furthermore, there are no details regarding his body measurements.

Also get to know more about the birth facts, education, career, net worth, rumors, height, and social media of different personalities like Jeff Garlin, Dave McCary, and Steve Guttenberg.