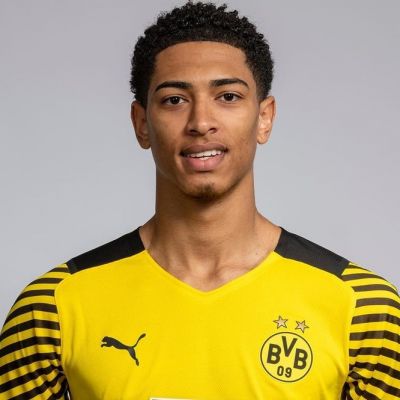 What Is the Relationship Status Of Jude Bellingham?

Being relatively young and focused on his career success, he has stayed away from love and romantic life.

So, we can safely assume that Jude Bellingham is single and not dating anyone at the moment.

Who is Jude Bellingham?

Jude Bellingham is a well-known English footballer. He is an active player for the Bundesliga club Borussia Dortmund as well as the England national team.

Being an active player from the England national team, he led England’s victory over Iran, by scoring his first goal in the 35th minute, of the FIFA World Cup 2022.

England kicked off their 2022 World Cup campaign by beating Iran with a 6-2 win, with a brace from Bukayo Saka, Raheem Sterling, Marcus Rashford, and Jack Grealish.

Similarly, his ethnicity is Mixed(English and African) and according to the astrological chart, his birth sign is Cancer.

He was born to his father, Mark Bellingham, and his mother, Denise Bellingham. His father, Mark is a sergeant in the West Midlands Police and was involved in non-league football for more than two decades.

Jude has a younger brother named, Jobe, who is a Birmingham City player.

As per his academics, he went to Priory School in Edgbaston, Birmingham.

When he was just 15 years old, on 15 October 2018, Jude made his debut for Birmingham City’s Under-23 team against Nottingham Forest away from home.

On 31 August 2019, he win by 2-1, over Stoke City, scoring his first goal for Birmingham City. From the 2019 to 2020 campaign, he was named both the Championship Apprentice of the Year and EFL Young Player of the Season.

Borussia Dortmund from Birmingham City with an initial fee of around £25m, in July 2020. On 14 September 2020, he made his Dortmund debut, by playing a DFB-Pokal game against MSV Duisburg. All total the team won by 5-0.

He has played for England at Under-15, Under-16, Under-17, and Under-21 levels. On 12 November 2020, he made his senior debut for the England national team, during the friendly win by 3-0 over, the Republic of Ireland at Wembley.

Within a year, the worth of Jude Bellingham has increased significantly. His current market value is 75 million Euros.

Bellingham has an estimated net worth of around $4.2 million. He is paid a weekly salary of $60,000.

His net worth is expected to skyrocket as time progresses as he has an active career.

Apart from these, the young player has been in a contract with the sporting brand Adidas since 2020. He promotes all the apparel and sporting items by Adidas through social media as well.

The English midfielder is currently soaring to fame after scoring a brace in the 35th minute, of the FIFA World Cup 2022, on November 21, 2022.

The game is being held in  Qatar, Al Bayt Stadium.

19 years old Borussia Dortmund star, stands at the height of 6 feet 1 inches and weighs around 75 kg. Adding more, he has a brown complexion, a set of black eyes, and hair of the same color as well.

Being a professional footballer he is quite popular on social media platforms. On Instagram and Twitter, he has garnered more than 3.2 million and 538.3k followers.

There is also a fan-based Facebook page under his name, that has garnered around 17k followers and 14k likes.