Jude Law married Sadie Frost in 1997 and the couple had been blessed with two sons (Rafferty and Rudy) and a daughter (Iris). However, the couple could not live together for long and, divorced in 2003.

Then, Law and American model Samantha Burke had a brief relationship in 2008 that resulted in the birth of Law’s fourth child, daughter Sophia.

Law’s fifth child, Ada with his ex-girlfriend, Catherine Harding, was born in 2015.

Currently, Jude is again married. He exchanged vows with Phillipa Coan on 01 May 2019. 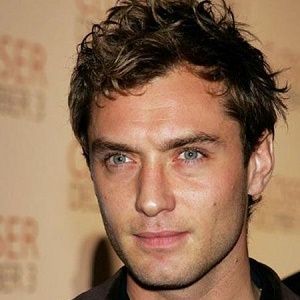 I'd rather be the Wicked Witch.I'm only wanted by directors for the image I give off, and it makes me angry. I always wanted to be an actor and not a beauty pageant winner.

Personally speaking, there's only so long you can go from film to film to film. There's an inspiration an actor gets from the stage. My only obligation is to keep myself and other people guessing.

Who is Jude Law?

The actor was born to his parents Peter Robert Law(father) and Margaret Anne(mother) on 29 December 1972 in Lewisham, London, England, UK.

His ethnicity is English and his nationality is British.

His father was the youngest headmaster in London while her mother was a comprehensive school teacher. He was named after both the book Jude the Obscure and the song Hey Jude. Natasha Law is his sibling.

When he was six years old, he was interested in children’s play.

Jude Law started his career in the British crime drama Shopping which features his wife also. He became more widely known with his role in the Oscar Wilde biopic Wilde in 1997.

After that, he played in ‘The Wisdom of Crocodiles in 1998.  Besides that, he played a mob hitman in Sam Mendes‘s 1930s period drama Road to Perdition in 2002 and he again collaborated with director Anthony Minghella in 2003. Law portrayed the title character in Alfie, the remake of Bill Naughton’s 1966 film in 2004.

As well as Law portrayed the role of Kate Winslet‘s single-parent brother in the film The Holiday, a modern-day American romantic comedy written, produced, and directed by Nancy Meyers in 2006.

In 2011 he starred as a celebrity supermodel in the film Rage and Blogger and “prophet” Alan Krumwiede in the medical thriller Contagion.

In discussing his achievements and awards, People Magazine had named him “Sexiest Man Alive” in 2004. Another, he got nominated as Best Actor (Featured Role-Play) for “Indiscretions” for Broadway’s 1995 Tony Award. Similarly, he received the nomination for Outstanding Newcomer for the Laurence Olivier Award.

Yet, he has no controversy and rumor, he has been maintaining his personal life properly and keeping personal life away from the media and the public.

Jude Law: Salary and  Net Worth

He earns a huge amount of salary from his work but has not disclosed it to the media or public.

As of 2022, his estimated net worth is about $75 million that he earns from his profession.