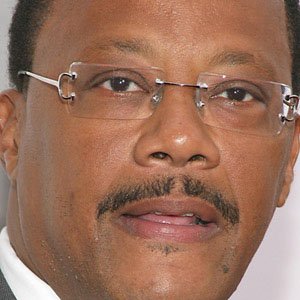 Don't drop your books. You might lose your lesson.

Do not ever give up trying - because eventually you will win.

Life was rough. We had to make due.

Since 1985, Judge Mathis and Linda Reese are happily living

Judge Mathis is a married person. He has been married to Linda Reese since June 1, 1985.

Who is Judge Mathis?

Judge Mathis is an American retired judge from the Michigan 36th District court.

Along with the judge, he is also a lawyer, writer, actor, and producer, who is best known for her appearances in ‘Judge Jeanine Pirro’ in 2008, ‘Madea Goes to Jail’, and ‘CornerStore’ in 2011.

He is currently 61 years old and his birth name is Gregory Ellis Mathis.

His father was a Detroit native and his mother was a devoted Seventh-day Adventist, nurse’s aide, and housekeeper. He was the fourth of four boys of his parents.

His parents got a divorce when Greg was a toddler and his mother brought him alone to Detroit during the turbulent 1960s and 1970s.

He shifted to Herman Garnes in 1964 and lived there till 1970 and then moved away from the housing complex in order to avoid rising drug use and rates of violent crime.

He was a former gang member as a teenager and his life turned around after he heard Jesse Jackson’s speech. Then, he became a lawyer.

Greg holds American citizenship but his ethnicity is African-American.

With the help of a close family friend, he attended Eastern Michigan University and discovered his interest in politics there, and soon enough became a campus activist and worked for the Democratic Party.

He completed his Bachelor of Science in Public Administration degree from the Ypsilanti Campus and then joined the University of Detroit School of Law to study law and graduated with his Juris Doctor degree in 1987.

Judge Mathis looked for employment in Detroit’s City Hall after graduation with a Bachelor of Science in which he subsequently became a member of Alpha Phi Alpha fraternity.

He became the youngest person to hold the post in the state and he was rated at the top of all judges during his five years career.

Greg did an unpaid internship for Clyde Cleveland and began his political career. He was also a city council member.

After graduation from the University of Detroit School of Law and he was subsequently elected as a district court judge for Michigan’s 36th district.

In 1988, he was appointed as the head of Jesse Jackson’s Presidental campaign in the state of Michigan and later, became the head of Mayor Coleman Young’s re-election campaign.

He was invited by the Obama administration in order to take part in ‘My Brothers Keeper’, a White House Initiative to empower boys and men of color.

Then, he began his career as an actor in a Television show called Judge Mathis, which ran for 16 seasons. He is also the author of the books Street Judge’ and ‘Of being a Judge to Criminals and Such’.

It seems he has not been awarded and nominated for his work till dare in his profession. On September 6, 2021, the 23rd season of Judge Mathis premiered.

Judge Mathis has an estimated net worth of around $20 million and his salary is $5 million as per 2022’s data.

At the age of 17, he was arrested for a petty crime and was even sent to jail and his mother was diagnosed with cancer during that time.

Then, he was offered early probation and he had to start working.

Judge Mathis has black eyes and black hair. His height is 5 feet 9 inches and weighs 82 kg.