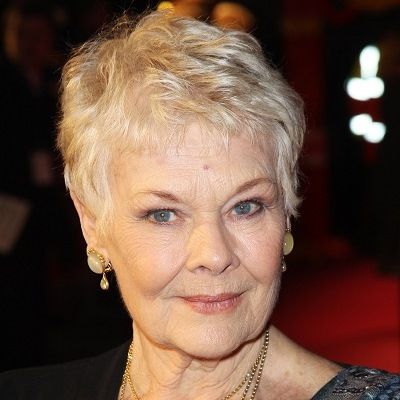 I don't like reading scripts very much. I like it better for someone to just explain to me what it is about this story

I don't think anybody can be told how to act. I think you can give advice. But you have to find your own way through it

I am very un-divaish. Very rarely in 52 years in the business have I met anyone who has behaved in a selfish way.

Judi Dench married British actor Michael Williams on February 5, 1971, after dating him for almost 10 years and had a daughter named Tara Cressida Frances Williams who grew up to be an actress. The couple applied for adoption in order to have a second child but were turned down.

Judi became a grandmother at the age of 62. She is an animal lover and has owned several pets including dogs, cats, guinea pigs, fish, and a racehorse.

Her husband appeared with her in several stage and television productions, till he died of lung cancer in 2001. After her husband died she was not prepared for another relationship, till she started dating conservationist David Mills in 2010.

Who is Judi Dench?

Judi Dench is a popular English actress who made her professional debut in 1957 with the Old Vic Company. Likewise, she performed in several of Shakespeare’s plays, in such roles as Ophelia in Hamlet, Juliet in Romeo and Juliet, and Lady Macbeth in Macbeth. Whereas, she also branched into film work and won a BAFTA Award as Most Promising Newcomer.

Judi Dench was born in Heworth, North Riding of Yorkshire, England on  December 9, 1934. Her birth name is  Judith Olivia Dench. Her father’s name was Reginald Arthur Dench (a doctor) and her mother’s name was Eleanora Olive Jones (a wardrobe mistress).

Talking about Judi’s education history, she studied at all-girls Mount School and became a Quaker due to the influence of the school. She trained to be a designer at York School of Art for a while but developed an interest in theatre. She thereafter joined the Central School of Speech and Drama where she took part in a number of plays.

Talking about her profession, she made her professional theatre debut at the Royal Court Theatre as Ophelia in ‘Hamlet’ in an Old Vic Company production in 1957. She remained with the company for four years and toured the US, Canada, and Yugoslavia. In the year 1961, she joined the Royal Shakespeare Company and appeared in ‘The Cherry Orchard’ at the Aldwych Theatre.

Likely, she played the role of Isabella in Shakespeare’s ‘Measure for Measure’ the following year. She also appeared as Lady Macbeth in a Playhouse Company production. Additionally, she made her screen debut in the British drama film ‘The Third Secret’ in 1964 followed by a cameo role in the Sherlock Holmes movie ‘A Study in Terror’ in 1965. Likely, she also made her television debut in the BBC serial ‘Hilda Lessways’ in 1959.

In addition, she made her big break with her role in the film ‘Four in the Morning’. She also made an appearance in the musical ‘Cabaret’ that year. Whereas, she rejoined the Royal Shakespeare Company and made several appearances with them for the next 20 years. Her performances include varied roles in the tragic play ‘The Duchess of Malfi’, the comedy ‘Trevor Nunn’s’ and musical ‘The Comedy of Errors’.

In fact, she appeared in a number of hit movies until she portrayed the character ‘M’ in the James Bond movie ‘Licence to Kill’ in 1989 and ‘GoldenEye’ in 1995. Her stern character that was based on the real-life MI5 boss Stella Remington became her trademark. Thereafter, she has consistently appeared in the role. Besides her role as ‘M’, Dench has appeared in several movies as a strong character.

During her long career, she has won over 50 awards with more than 200 nominations. These include a Best Supporting Actress, Academy Award, for her role in ‘Shakespeare in Love’, Academy of Interactive Arts & Science Award for Outstanding Achievement in Character Performance – Female for ‘GoldenEye: Rogue Agent’, six BAFTA film awards and four BAFTA television awards.

Her other significant awards include two Screen Actors Guild Awards for ‘Chocolat’ and two Golden Globe Awards for ‘Mrs. Brown’ and ‘The Last of the Blonde Bombshells’. Similarly, she has received 10 honorary awards that include a lifetime achievement Special Olivier Award and BAFTA fellowship.

She has an estimated net worth of around $35 million (as per 2019 data) and she has earned that sum of money from her professional career. Her acting career has helped her in gaining fame and fortune both.

Judi Dench has not been involved in any rumors and controversies in her personal and professional life till date.

Judi Dench has a height of 5 feet 4 inches and she weighs is 55Kg. Judi’s hair color is grey and her eyes color is green.

Also, read the affair, salary, the net worth, controversy, and the bio of Emma Davies, Helena Bonham Carter, Kenneth Branagh